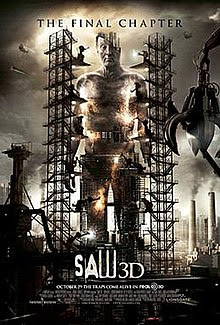 Initial Note: I refuse to call this film by its official name "Saw 3D" because its a stupid gimmick and a poor choice on filmmakers in an attempt to make this film stand out from the rest of the franchise and sell more tickets with its 3D. From this point on this film will be referred to as "Saw VII". Thank you.
Second Note: After I wrote this review for the theatrical release of the film, it was renamed for home video using the tagline to Saw: The Final Chapter. I will continue to refer to it as Saw VII because The Final Chapter is almost as bad as Saw 3D. Thank you. Again.

Was I excited for Saw VII? How can I not be? Saw VI was a return to form for the series as it focused down on the lessons learned through the traps and re-balanced the narrative to intertwine in better ways. So Saw VII should do this too right? Not really. Although the story line is fairly interesting on a basic level (both of the main plots) and the general things one looks for in a Saw film are all present, the blending and execution of these elements is where the film lacks and makes it, easily, the worst in the franchise.

PLOT A: Dagen (Flanery) is the author of a bestselling novel called 'S.U.R.V.I.V.E.' where he discusses surviving a Jigsaw trap. He calls to arms to find the positive parts of the lessons learned for survivors of the traps and happens to make a shit load of cash doing it. Too bad Jigsaw gets rather pissed about this because Dagen is a liar. So Dagen is thrown into an abandoned place and must save all of his conspirators in his lie eventually leading to a final challenge to save his unknowing wife. Can he do it in time and follow his own advice?

PLOT B: At the end of Saw VI we had Jigsaw's ex-wife Jill Tuck (Russell) loading new Jigsaw Det. Hoffman (Mandylor) into the bear trap headset. Luckily, (not for Tuck) Hoffman survives with only some minor face tearing. Now Hoffman is out to take out Tuck and get his revenge all the while setting up one of Jigsaw's final traps (Plot A) to distract police while he tries to infiltrate the police station and get him some Tuck.

As you can see, there are two distinctive plot lines going on with Saw VII. Both are relatively interesting and both are distinctly Saw story lines that we have become something we are all dying to see continue on. The poor part about this one is that they don't intertwine like they should. It brings back nightmares of the poor narrative flow of the fifth entry. Although they do attempt to intertwine them, its mostly surface level and rather weak in their efforts. Throw in some poorly developed subplots in those (including a poorly acted IA cop looking to score on Hoffman and a poorly developed story that includes a random machine gun climax that comes completely out of the blue and makes no sense) and there just seems to be an odd loss of focus in the plots.

We get very little new material in back story for most of the big characters sans a new surprise appearance by Saw alumni Cary Elwes as Dr. Gordon (although I'm pretty sure that there was a footless corpse in one of the previous entries that we were to assume as him...oh well) the film does like to throw its own surprises that work quite well even if they get pretty obvious later on and if you are willing to suspend your sense of disbelief in major ways. The film does come full circle by the end (it IS the final chapter right? *eye roll*) but it leaves it open for continued franchising. So Saw fans may enjoy it on some levels despite its massive flaws.

Although Saw VII does have some great and unique traps, on a side note this was the first saw I gagged at with the key on a string sequence - if you saw it you know it, and its plots are fairly well developed if generally unbelievable. It's just poor blending of some of the plots and subplots that hurts the overall experience. I also have some issues with some of the films twists but I won't go into those without giving away some crucial spoilers, but as a fan it felt forced in many ways. Despite some solid elements, it's easily the weakest of the franchise (thus far, you know more are coming in some form) and its mostly for fans.

BONUS RANT: I saw this one in 3D, my first 3D experience mind you, and I thought that it felt like the film forgot it was in 3D more often than not. Except for a few moments thrown in of CGI gore and a dream sequence seemingly thrown in just for the 3D, there really is no reason to see it in 3D.

Written By Matt Reifschneider
Posted by DarkReif at 10:04 AM