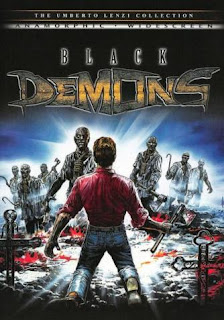 Out of all three films also known as "Demons 3," "Black Demons" is the closest to being "official" as it was the only one to be released in Italy as "Demoni 3." Yes it was actually released as a follow-up to Lamberto Bava's gruesome twosome in its home country of Italy. Ironically though it is also the one that has the LEAST to do with Bava's films. First of all it doesn't even contain demons, just a half-a-dozen zombies. Second it has no cast or crew connections. "The Church" and "The Ogre" at least had cast and crew members that worked previously on Demons 1 and 2 but not here. To top it off this is BY FAR the worst of the "Demons 3" posers which just adds insult to injury.

Like I mentioned earlier, our monsters aren't even demons but zombies. These zombies were slaves on a Brazilian plantation (hence the somewhat politically incorrect adjective "Black" used in the English language title) who are unwittingly raised from the dead when a vacationer plays a recording of a voodoo chant that he attended. Now zombies need to spill the blood of 6 white people and our 3 vacations must survive the night before falling prey to the black zombies....errrr.....demons.

Black Demons was released in 1990 and this was right at the end of the Italian film market before it collapsed. All Italian films at this time were very lackluster, showcasing extremely low budgets, poor plots, and bad acting. Italian directors who once were great eventually surcame to the failing film industry and genre great Umberto Lenzi was no different as Black Demons is a far cry from even his trashy early 80's bloodfests like Cannibal Ferox and Nightmare City. All the amazing stylistic shots from his 70's crime films and even the trashy entertainment value of his early 80's efforts are missing and all that's left is a desiccated husk.

The acting is dreadful and the plot is painfully simple and dull. Umberto tries to liven up the film with some gory killings but even they seem like bad carbon copies of earlier Italian classics. The film is just basically a Night of the Living Dead clone with a Brazilian setting but the film lacks a soul, making it nothing more than a time waster.

Fans of Italian horror films will no doubt want to check it out but this one is only for Italian horror die-hards. It's mindless, dull and just plain forgettable. People expecting another gory trash classic from Umberto Lenzi and going to come out extremely disappointed.... not to mention people expecting this to be a true sequel to Lamberto Bava's insanely entertaining Demons duology.

Written By Eric Reifschneider
Posted by Cronosmantas at 9:30 PM