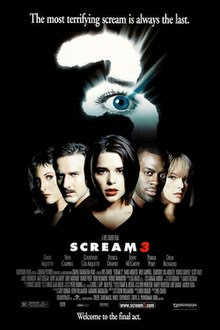 What made "Scream" so much fun was its delicate balance beam ballet of creating a completely cliche Slasher and knowing it. "Scream 2" had the franchise starting to wobble as it lost its balance. "Scream 3" is the franchise doing a face dive off the balance beam down into parody territory only to break its neck in a horrifying manner that is neither scary nor funny. Although, fans I'm sure will curse my name for saying this but..."Scream 3" is no better (in fact, probably worse) than many of the spin-off slashers that this franchise spawned in the 90s.

Sidney (Campbell) is now living uncomfortably in hiding working as a woman's phone call counselor. Too bad when Cotton (Schreiber) ends up on the sharp blade of a knife in Hollywood, she seems to be once again in the middle of some sort of killer's fantasy kill. On the set of 'Stab 3', the cast and crew are suddenly throw into another mystery about Sidney's past as a killer in a ghost mask goes on another rampage. Luckily some old friends (even dead ones!) are there to help solve the mystery and unmask the wicked villain before he kills them all (again).

At this point, this is become an 'R' rated version of Scooby Doo. Let's unmask the monster to solve the mystery! SCOOBY DOOBY DOO!!!! Now that might seem a bit harsh to say, but dammit, I'm tired of this franchise desperately trying to come up with new ways to over complicate a simply story with motivations and surprise 'whodunnit' mysteries. Its tried to become its own franchise, failing to fully utilize its self-referencing style to any kind of fun and original usage, and ultimately fallen prey to becoming a parody on itself. The series has now become illogically inept to what it once was. Part of this might have been the lack of Kevin Williamson as a writer (he wrote the first two), but on every end "Scream 3" just failed to delivery.

With most of the cast seemingly on auto drive for this one and Wes Craven seemingly also only working hard enough to earn his paycheck, "Scream 3" fails to even garner some of the charm it ever has accumulated. The logical steps of the character arcs is damn silly, the addition of ghostly apparitions of Sidney's mother seem forced, and the final killer reveal just comes completely out of left field with an overly complicated explanation. Most of the film never really makes sense and the few scenes that do work are just shadows of what worked in previous entries. This is truly rock bottom for a franchise.

Now I'm done with the "Scream" franchise and whoever requested these reviews should feel pleased that I actually made it through this third entry. Its boring, redundant, repetitive, boring, and worst of all, completely illogical. You know its gotten out of hand when I'm going to go watch "Urban Legend" to feel better about myself.

BONUS RANT: So you kill off the Horror film expert Randy (Kennedy) in "2", which was a poor choice to begin with, and to help the characters understand how a horror trilogy works they bring in his little sister (?!?!) with a video tape he previously recorded (?!?!?!?!) on event that he died in "2" (?!?!?!?!?!?!?!?!?!?!?!?!) explaining to them how it works? WHO THE FUCK WROTE THIS? YOU JUST BLASPHEMED THE ONLY CHARACTER WORTH TWO SHITS IN THIS FRANCHISE. Holy Alex Murphy that pisses me off.

Written By Matt Reifschneider
Posted by DarkReif at 12:02 AM