Masters Of Horror: Incident On And Off A Mountain Road - 4/5 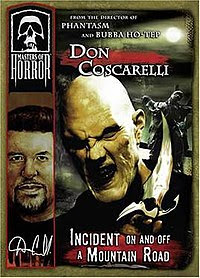 When a young woman gets knocked off the road in a remote mountain area, she finds herself being stalked by a giant white skinned man/monster. Using some serious survival techniques shown to her by her semi-crazy survivalist obsessed husband, she attempts to survive the night only to find herself digging herself deeper and deeper into a nightmarish world where this monster seems to rule with an iron fist and odd ideas.

For the very first episode for the first season of "Masters Of Horror", we are treated to a very well paced and developed story that crosses a bit of slasher with a bit of atmospheric 'hellbilly' horror together. This episode actually works with crossing two stories, one being the young woman vs. the monster plot and the second being how she is able to survive according to rules that her husband has been dictating to her. The character interactions (wife and husband story) seems like it might be padding for the first 3/4 of the episode giving us a bit of backing and reasons to why she knows the things she does. What this story does is give the episode a nice twist at the end and give the show a bit of a crazy duel meaning. Some great acting, great special effects (sans a few odd blue screen moments), and solid atmosphere make for a fun watch. Coscarelli seems rather light on humor for this segment in his directing, but the appearance of Angus Scrimm as a crazy old coot trapped in the monster's cabin reminds us of his style. This episode is a great kick off to a killer show and gives us a taste of what to expect from the rest.