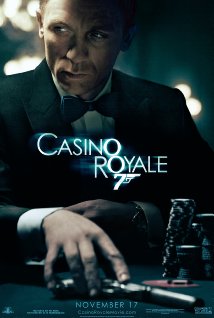 Despite the commercial success of "Die Another Day", by the grace of God, they decided that the James Bond franchise needed another reboot. So what better way to reboot the franchise than get a new Bond and bring back a director that did with immense success before. They decided to take it too a whole new level though and literally REBOOT the franchise starting by going back to Bond as a new 00 agent. Thusly we have Daniel Craig's first Bond outing as a young agent taking on one of his first missions. This marks (another) return for the franchise towards a far more serious tonality with lots of great dark and cold undertones. And once again, showing that Bond can indeed still make a great film without sacrificing its distinct Bond elements.

STORYLINE: After achieving his official 00 status, Bond (Craig) is sent on one of his first missions to watch a low life bomb maker. Unfortunately, when things go awry and Bond makes the naughty list for MI6 he decides to follow a small lead. This small lead gets him involved with a little stock market treachery that leads him on a trail to finally pin some serious accusations on a black market accountant in the form of Le Chiffre (Mikkelsen). To do so though they need to strip him of some funds and MI6 plans to do this using Bond to defeat the man in a high stakes poker game at the infamous Casino Royale. With an accountant at his side in the form of Vesper (Green) Bond sets up to take down Le Chiffre on chip at a time. Too bad this blood weeping villain might be better (or worse) off in his connections than they assume.

PLOT 5/5: Although based on the first James Bond novel that focuses on a game of baccarat, they definitely modernized this film almost perfectly to make it far more exciting. Updating it to a game of poker instead (really, who knows how to play baccarat anymore?) and adding in significant back story that includes more twists and turns and some seriously awesome action sequences they definitely did this film well off just from its more intense script. Adding to the fun is that they really embrace this 'young' James Bond to a T allowing us to see why he is the way he is with his work - why the man is so cold, his capabilities, and of course the source of his love of tuxedos and martinis. Bringing back Martin Campbell to the director's chair allows it to balance this seriousness and spy film like qualities while never losing its over the top moments that all seemingly feel far more realistic with him in the chair. The free running sequence where Bond chases the bomb maker into an embassy and gets into a shootout with the military could have been so cheesy and ridiculous but never does. That's the brilliance of Campbell with a good Bond script.

BOND 5/5: Firstly, Daniel Craig is one bad ass Bond and a perfect casting for this modernized version (even if he does have blond hair). Although he never quite has the 'suave' that many of the others did, he does have this delightful charm to him as is accentuated with his on screen chemistry with Vesper and his odd ability to make his striking blue eyes seem both caring and completely cold. That's essentially what makes Craig a good Bond. He is able to balance the cold and the charm in ways that we quite haven't seen before. His young and rather defiant take on the character also benefits this 'coming of age' story well too and he pulls off this realistic spy character all too well. Bravo for his debut!

VILLAIN 5/5: Normally, Le Chiffre would have been a villain that might have boring (he kind of was in the books) but with Mikkelsen's really intense and subtle performance and the film's build of his desperate measures and connections makes for a damn memorable performance. Many times I likened his look, acting, and almost untouchable presence to that of Dr. No from the original Bond film. That's a compliment. Not to mention that this guy weeps blood when he's stressed. If that's not bad ass I don't know what is.

BOND GIRL 5/5: Weird. I'm pretty sure that they didn't just stick Vesper into the plot for the sake of putting a pretty girl in there. Wow. They didn't! She has a purpose and has a character arc! No way! Her chemistry with Bond is actually palpable? No way! She also has a nice (plot influenced) affect on Bond's character which gives her even more relevance and puts her right on top of being one of the best Bond girls out there in the franchise. She hits all the marks and Green's performance is torn and charming at the same time. High marks all around!

"Casino Royale" not only reboots the franchise fantastically, it might be one of the best Bond films the franchise has seen yet. Campbell out does his previous high mark of "GoldenEye" with flying colors and all speculation that the franchise was going to drown again are sent scattering with this serious and realistic look at Bond and his early days. This is a Bond film that even non-Bond fans can enjoy and embrace.

BONUS PRAISE: Its nice to see a Bond torture scene in this film. Those scenes were prevalent in the books and it makes for a highlight for the film (for the women too that get to see Craig barely covered up) to show just how bad ass Bond is that he can joke in that tense situation. Hell yeah.

Written By Matt Reifschneider
Posted by DarkReif at 8:38 PM