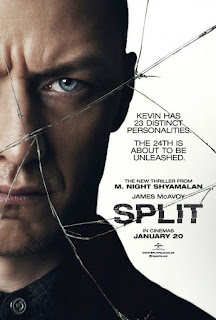 The birthday party was a success. Except for the part where Casey’s (Taylor-Joy) ride breaks down and she has to hitch one back with two girls (Ridchardson, Sula) that essentially invited her out of pity. She will not make it home that evening. That is because Kevin (McAvoy) has abducted these three girls and is going to hold them in his living quarters until it’s time. Kevin has plans for them. He has 23 personalities that stem from severe childhood abuse and he’s afraid of what’s coming…

Made for a estimated $9 million, Split never feels like it because (and again despite the gimmick of its core concept) Shyamalan strips down the film to the classic elements of a thriller and then powers it with impeccable writing and an ace up the sleeve: James McAvoy. More on the latter part in a second, but at the core of why Split works is that it uses its basic concept and layers it with thoughtful character building. The low budget must have spurred Shyamalan to go back to his roots in classic storytelling. He focuses on two characters: a protagonist and an antagonist and then energizes it with their repeated collisions. This is not a film that is just about young women escaping the clutches of a madman, this is a film about how a person’s life experiences can prepare them for the moments when they truly need them (or not). This is a repeated theme by both Casey and Kevin in their interactions and as their pasts are revealed slowly, for Kevin in interactions with his psychiatrist that really humanizes him for the audience as a victim too and in small flashbacks for Casey. It’s a dynamic approach to make both characters relatable to the audience and it works splendidly to give the film a depth beyond its normal thriller structure and approach.

To make it work though, Shyamalan had to essentially put the entire film into the hands of both the leads. Quite honestly, they make it pay off with some substantial performances. Taylor-Joy does impressively well as the outsider who tries to manipulate the situation, but the true MVP of Split is McAvoy. The idea of an antagonist that has multiple personalities is gimmicky, but his performance and the immediate connection he makes with each of the personalities we see is jaw-droppingly good. The story is written to help him out, certainly, but by the end of the film when he must switch between characters in rapid moments without the help of editing, music, or visuals indicates just how he nails it. Even when it comes to the reveal of its ending, he inhabits such a new personality for the film that the gimmick works and it smoothly moves in conjunction with everything else in an easy to consume manner.

Split is a film that rises above the many issues it could have run into by taking its themes and well-constructed characters and giving it all a human face that an audience can latch onto even when it approaches some uncomfortable subject matter. Shyamalan expertly navigates the writing and direction to avoid its pitfalls to deliver that kind of film. It’s powered by impressive performances, uses its stripped down plotting in effective ways, and does not succumb to the ‘good vs evil’ simplicity that films like this normally intend. This is a film that exists in-between those lines giving the characters a true human side.

Needless to say, yes, Split does certainly feel like the Shyamalan that we all came to love with his first handful of films. It’s thought provoking, intense, and for all purposes well made. Between this and the fun that I had with The Visit, it does make one feel like he is mounting a comeback worthy of the praise he received in his early career. Split is the kind of perfect film for this and it comes with very high recommendations.

Written By Matt Reifschneider
Posted by DarkReif at 12:40 PM