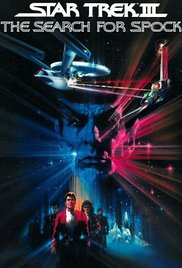 Let’s do a quick recap of the Star Trek theatrically released film series to this point in time. One: snooze fest. Two: Massively entertaining adventure. Oh man, that didn't take nearly as long as I thought. All right, so really, is it to anyone’s surprise that the third entry, a direct sequel to Wrath of Khan, would be somewhere in the middle between massive disappointment and massive entertainment? Star Trek III: The Search for Spock sees our lovable crew return after the events of the second film to deliver a thoughtful, but somewhat safe third film that will satisfy the Trekkies but hardly remain as lovable and fun as the previous entry. There is a lot to admire about Search for Spock, but it’s also a somewhat flawed film that lacks the insight to delve too much into the deeper layers of its narrative as it focuses on delivering a robust plot.

After Spock’s (Nimoy) body was ejected into the newly formed Genesis planet upon his death, the crew of the Enterprise return to the Federation space station to lick their wounds and recuperate. Somethings up with Bones (Kelley) though and he’s acting odd. When Spock’s father visits Kirk (Shatner) to find out what happened to Spock’s consciousness, they realize that they must return to the Genesis planet and retrieve his body before a rogue ship of Klingons get there first.

There are a lot of great concepts on hand in Search for Spock. The idea of Bones and Spock having to share a conscious, the crew of the Enterprise having to hijack their own ship and go rogue against the Federation to find Spock’s body, and even the idea of pirate Klingons lead by a scene stealing performance from Christopher Lloyd are all highlights of what this film has to offer. Once again, the pacing is quick and effective as the film unravels a lot of various plot lines for the audience, including reintroducing Kirk’s son and New Spock (Saavik) played by Not Kirstie Alley for some solid emotional parallels in themes to be gathered. The team are up to delivering a lot of fun moments too as there seems to be even more comedic bits added into the dialogue and fun little pieces to keep things moving when the film is desperately trying to jam in more plot exposition and characters to cover. Leonard Nimoy returns for what amounts to a brief cameo in the end, but his role as a director is what really brings him back into the fold – even if he can be hit or miss at keeping the narrative flow moving. He really loves to hang out and explore the little moments of charm from the cast and plot which gives the film an entertaining aspect without having to add in a ton of action or suspense to cover it up. Perhaps my favorite scene is when Lloyd’s Klingon captain shows up on the surface of Genesis, grabs a ridiculously gross worm creature, crushes it with one hand in a weirdly tense struggle, and then reports to base that there is nothing happening. It’s theatrical, silly, and works in odd ways. A good representation of what keeps Search for Spock afloat.


The problem then remains that this film doesn’t quite have the knack for finding those key emotional and resonating moments to carry the weight of its overzealous plotting. In particular, there are a handful of strong moments for Kirk that both Shatner and Nimoy as a director under punctuate. Granted, many of these are spoiler moments for the film and I won’t go into detail here, but the film needed to dig into the idea of loss of life, loss of soul, and finding one’s way again in much more effective manners. This happens in a variety of places where more interesting ideas should have been explored. The idea of Bones and Spock living in the same mind could produce some hilarious and thoughtful moments, but they don’t really explore that. A shame considering the potential.

Still, in the end I quite enjoy what Search for Spock has to offer. It’s a fun movie and it moves at such a swift pacing that it keeps the audience hooked throughout some of the denser plotting devices. It doesn’t have the brains to dig further into the elements that would have made the film resonate on a deeper level, but it doesn’t come off as particularly offensive in playing it safe either. As is, this film doesn’t deserve some of the flak it receives as being a cursed odd entry into the franchise. It’s not nearly as effective as it might have been, but then again it’s also being compared to Wrath of Khan which worked so impressively.

Written By Matt Reifschneider
Posted by DarkReif at 8:39 AM