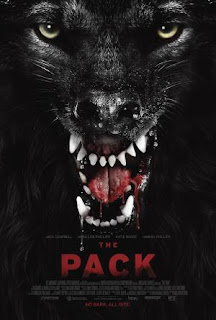 When it comes to The Pack, what starts out as its best attribute quickly becomes the reason the film falters in the third act: an even keel pacing. The film rocks its first half with a subtle approach to building a family dynamic, introducing the audience to the villainous pack of dogs, and the style of the film which is a bit more artful that I would have expected from a genre film of this ilk. It has a strong and low key synth score that pulsates and by the time the first official kill happens on screen, I was completely hooked by what The Pack has to offer. Unfortunately, it stumbles through its second half. There are a handful of exciting moments including some tense "I see a dog in the house" bits that work, but the film rarely ups the intensity once it hits its stride in the second act. It becomes repetitive and leaves some odd plot progressions hanging. By the time the final 20 minutes arrive, when things should be their most frightening/intense, The Pack struggles at giving the film a real finish with impact and it just sort of ends. There are certainly things to enjoy about The Pack and the set-up is slick, but it just doesn't quite have the writing and pizzazz to finish it off. 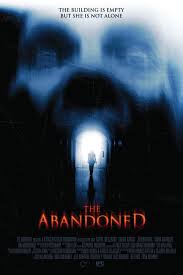 THE ABANDONED (2016)
Director: Eytan Rockaway
Notable Cast: Louisa Krause, Jason Patric, Mark Margolis, Ezra Knight
If the first hour and 20 minutes of this film had layered itself even better, then the big reveal twist in the last ten minutes might have packed an emotional punch worthy of this dreary psychological horror flick. However, The Abandoned lacks that touch to hook the audience for its extensive build up. It's not that scary, it's rarely as tense as it wants to be, and it feels rushed to get the audience hooked into its somewhat shallow character arcs. Even then, the writing can be horribly hit or miss as the film flounders with how we are supposed to feel emotionally about certain characters, situations, and moments. Sure, the ending is kind of fun and it makes me want to watch it again to see if there are any clues I missed, but the rest of the film was something of a boring and predictable ride. Oh look, it’s another child focused mystery haunting film! The Abandoned needs to work a bit harder than that to sell me on a concept that I’ve already seen a few hundred times. 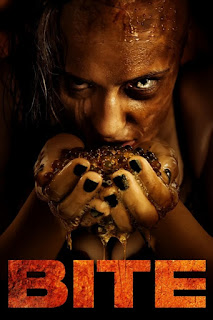 BITE (2016)
Director: Chad Archibald
Notable Cast: Elma Begovic, Annette Wozniak, Denise Yuen, Jordan Gray, Lawrence Denkers, Barry Birnberg
While Bite is not nearly as gross as the hype made it out to be (which seemed to be the main focus of the marketing,) it is still a rather effective body horror film. One part David Cronenberg's The Fly and one part Contracted, the film takes a modern spin on the idea of body horror representing the emotional decline of a young woman (with some slick subtle use of gender issues at the core of its character spiral) and layers it with some very impressive practical effects to add to its ooey-gooey nature. It's not a revolutionary film by any means, but it was a pretty impressive independent horror watch in the end. The performances can be hit or miss overall, but they were solid when needed and the special effects were most certainly the MVP of the film even if it only made me queasy instead of horrified like the marketed indicated I would feel. I'm always for a film that aims to be Cronenbergian at its base level and Bite does it with just enough flair to keep an audience hooked. For indie horror this year, Bite is certainly one to take a look at considering some of the other weaker films that have been released.