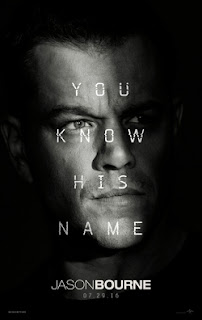 Before I dig into this review for Jason Bourne, I would like to set up some context for my opinions on the Bourne franchise. I don’t love it to begin with. It’s overrated. I know, I know. Everyone that thinks it’s the best action franchise in the last few decades is probably foaming at the mouth right now, but I’ll stand my ground. The films have great moments and some smart writing, but director Paul Greengrass undermines a lot of it with his style which devours everything in full becoming a distraction. For Jason Bourne, Greengrass comes back to help with writing duties along with directing and brings Matt Damon back with him – ignoring the events of The Bourne Legacy in the mean time – and delivers the most lackluster and incomprehensible Bourne film yet. Perhaps my expectations were lofty considering how much I enjoyed the trailers leading up to it (which I’ll mention again in a second), but Jason Bourne is a mess. Writing, directing, narrative. It’s a goddamn mess.

Jason Bourne (Damon) has been a wandering soul since the upheaval of Blackbriar and Treadstone. He makes money by street fighting and just exists. That is until an old friend (Stiles) hacks the CIA and finds out that there is a new program called Ironhand being used and that there is even more to Bourne’s past than what was uncovered previously. Now Bourne is back, re-bourne if you will, and he’s going to find out what the head of the CIA (Jones) knows and fend off a new “asset” (Cassel) or die trying.

The trailers for Jason Bourne looked slick. Bringing back Stiles was a solid move and the trailers indicated that perhaps Greengrass was going to pull away from his happy-go-edity-go-shakey style of direction for the film. I mean the scene where the SWAT truck plows through the streets of Vegas was solid, but there was an unedited shot of Bourne knocking out a guy in one punch. Nope. Greengrass didn't pull away from anything. In fact, that one hit punch has a minimum of two or three edits in the film version and it’s a completely different shot. Greengrass took a powerful moment, a ragged and ripped Bourne stepping up and destroying a man in one hit, and edited it so all of its power was gone. Gone. At this point in the film, which was only minutes into it, I swore out loud because I knew that I was going to massively disappointed. The shaky came was back. The zoom edits were too. Hell, this time it even might be more ineffectual at building tension and impact than ever before. Bourne was back, but so was the shitty action direction of Greengrass. How disappointing.

However, the smart writing, character development, and twisting narrative of both Supremacy and Ultimatum save those movies. If it wasn’t for Greengrass, I might be tempted to say that this franchise IS one of the best action franchises in decades. The foundations are rock solid. Jason Bourne, on the other hand, is built on foundations that shift and crumble as the film moves on, haphazardly jamming in overly serious trending conspiracy concepts from the last couple of years whether they make sense or not and failing to give the audience anything truly impactful to grab onto. Look, it’s another shady old man CIA villain. Look, another assassin sent to kill Bourne that’s underdeveloped and lacking personality despite being played by one of the greatest actors on the planet, Vincet Cassel.  Yawn. To make matters worse, Bourne has the character arc of a rock. He’s weathered and unmotivated outside of some weakly threaded “you killed my dad” cliché backstory. That’s the story they wanted to bring him back for? Seriously?

There are a few moments of redeeming qualities, namely a few solid performances from some secondary cast members like Alicia Vikander, and the final car chase through Vegas is actually kind of cool because (occasionally) Greengrass doesn’t leave the timing and spacing of the sequence on the editing room floor. I mean, it’s still choppy, unfocused, and probably will give the strongest stomach motion sickness, but it’s better than the rest. It’s too bad that the car chase is then followed by what should have been the film’s highlight in the hand to hand fight between Damon and Cassel because that sequence is so poorly shot and edited that what was potentially very strong fight choreography is left rotting in the city of Could-Have-Been-Berg.

Jason Bourne is a film that doesn’t have the strengths that its predecessors had in writing, characters, and performances to carry the shit show that is Greengrass’ ability to shoot and edit a film that isn’t a docu-drama of some sort. While the crowd around me in the theater seemed to enjoy it enough, it certainly didn’t receive the kind of praise and cheers that I expected it to get which is saying in and of itself. Jason Bourne is back, but his return was met with lackluster approval from an audience that wanted to care and never found the desire to do so.

It kind of makes me want more of The Bourne Legacy characters instead. At that one didn’t take itself so seriously and had fun with its premise.