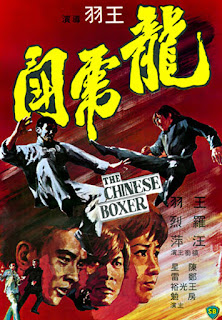 Jimmy Wang Yu’s career, both as a director and as an actor, was one that had to grow on me. When I was first starting to explore the martial arts field (and Asian films in general) I felt he was overrated. He wasn’t nearly as entertaining as the Venom Mob, his chemistry didn’t spark like the Ti Lung/David Chiang duo, and he seemed to lack the on screen finesse of those who worked with Lau Kar Leung. With time though, I’ve come to really appreciate his subtlety and strong screen presence in a lot of the earlier Shaw Brothers film. This is the reason that I decided to revisit The Chinese Boxer. My original viewing of the classic ‘basher’ film was undermined by my expectations and a dubbed version, but this most recent viewing seemed to strike a chord with me. The Chinese Boxer is not only a film that was ahead of the curve, it’s a fantastic directorial debut for Jimmy Wang Yu and it works on a variety of levels to be more than just another kung fu flick.

For a young man like Lei Ming (Jimmy Wang Yu) his life has been hard, but it’s fulfilling. He was raised by his martial arts teacher, he is set to marry his very supportive girlfriend, and his fellow students are living the life. That is until a vicious ex-student returns to town with a shady plan to use his new Japanese friends to over throw the training facility and build a gambling establishment there. Now he’s going to have to learn to combat a style he has never seen before and fight for the people.

While Bruce Lee might have made the ‘Japan vs China’ plot line a house hold formula for martial arts films in the 70s with his early films, Jimmy Wang Yu and company beat ‘em to the punch when it comes to The Chinese Boxer. Keep this in mind when going into the film as it might seem very formulaic by today’s standards, but it’s one of the first films to really run with the style of pure hand to hand combat and the ‘fight back’ narrative. However, no matter how straight forward the narrative might be, The Chinese Boxer executes the style in a very impressive manner.

Jimmy Wang Yu works well in the lead, he’s charming enough and believable in the more dramatic moments, but he really earns a much bigger credit as a director in this film. Unlike the style of other Shaw Brothers directors, he really focuses on creating a visual flow that feels unique for the time period and style that works in a shockingly effective manner. This benefits the more heartfelt tone and emotional aspects of the script as it careens from romantic scenes to forlorn sadness to intense battles for the lead character. It shows that that Jimmy Wang Yu has an eye for the artful aspects of the martial arts style on a multitude of levels and it gives The Chinese Boxer a variety of levels. There are details and little things in the film give it weight and Jimmy Wang Yu and company seem to be able to balance the broad plot points with some fun details.

I think that it should also be mentioned in this review that even though The Chinese Boxer retains a fairly straight forward approach to its story and characters, a formula that would be replicated many times over, I love that this film doesn’t necessarily shy away from the more vicious and darker themes at hand. Sure, the villain of the film greedily rubs his hands together, cackles, and builds a casino like some sort of Dudley Do-Right villain would in a cliché manner, but the film really makes you hate him and his Japanese karate expert buddies. The defeat of the martial arts school is not just a defeat, it’s a slaughter. The main villain just doesn’t extort from the people, he rapes a woman who tries to bargain for her husband’s life. This is an area that many martial arts films might fringe on, occasionally tread, but The Chinese Boxer uses them as powerful motivators for both the main character and the audience to make a connection. Lo Lieh and his sweeping side bang are evil and we want to see him suffer for his greed and viciousness in the worst way possible which makes the character arc for our goody-two-shoes hero all the more effective. This is why darker films can work and The Chinese Boxer uses it to some maximum benefit.

Still, the film does have some flaws as the music can be incredibly cheesy (come to find out, it’s a new score for the newer Celestrial Pictures release) and I almost wanted the final fight to be even more intense as it tends to play up Jimmy Wang Yu’s character as essentially all powerful by that time even if the film builds up to these moments with some impressively choreographed fight sequences and a brief training montage, but the rest is a superbly executed kung fu classic. It’s one that deserves far more attention than I’ve seen it receive and it’s a film that truly showcases Jimmy Wang Yu’s talents as both an actor and a director with its impressive executions.