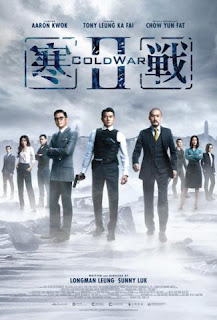 In preparation for the release of Cold War II, I recently went back and revisited the award winning first film. You can read my review HERE if you are so interested. The film holds up surprisingly well and it fueled a fire within me to see the box office crushing sequel. So it’s pleasing for me to be able to say that not only does Cold War II hold its own against its thrilling predecessor, but it might actually out maneuver it in a few ways. Considering how effective the original Cold War is as a thriller, the sequel has action that hits harder, conspiracies that run deeper, and performances even more layered. It’s not quite the same in many ways, but it certainly carries the same surefire intensity and writing depth that makes it one of the more unique thrillers one is likely to see anytime soon (outside of perhaps a third film, considering its worldwide box office success.) Hold on because the Cold War franchise is just getting warmed up with this latest thrill ride.

The Cold War mission was both a success and failure. The EU van is still missing, but the conspiracy has been uncovered that was meant to kick Sean Lau (Aaron Kwok) out of the running for police commissioner and the missing officers were rescued. However, nothing is really as it seems and a mysterious man has demanded the release of Joe Lee (Eddie Peng). Sean Lau’s involvement has left a lot of questions for an investigation by Oswald (Chow Yun Fat) and Lee’s father (Tony Leung Ka-fai) is just the starting point.

Perhaps one of the biggest selling points about the original Cold War was its relentless pacing. The film was full throttle for 95% of its run time and a lot of that energy and tone carries over into Cold War II. The film, essentially, picks up immediately where the first one left off as Sean Lau receives a mysterious call to release Joe Lee from prison. At this point, I think I was lucky to have re-visited the first one before watching this because right out of the gates Cold War II is running. Kidnappings, bigger conspiracies, and a big explosion kick off this thriller on the right track and it feels as though viewers didn’t even really get a breath between films – despite almost four years between releases. The film, overall, doesn’t quite have the frantic and time focused sense of urgency that its precursor had and it does take time to build in the new characters and slow itself down slightly in the second act to establish its stronger conspiracies ties. It’s different enough to feel fresh for the series, but the already grounded tension never really leaves and it makes for an edge of your seat experience that fringes on new ground without sacrificing the things that worked the first time around.


This slightly new approach allows for a bit more of a traditional thriller vibe to take hold and it allows some of the new characters their time to weave into the plot. Chow Yun Fat, while listed as an extended cameo of sorts, actually serves as a third lead to the already established Tony Leung Ka-fai and Aaron Kwok and his appearance adds in some life to the somewhat recycled structure. By the time the three of them face off against one another towards the end of the second act the tension has mounted enough that I could watch them argue, slam things on desks, and straighten their tailored suits all day. They are all distinctive enough in their view points and character builds that the audience sees it coming, but the execution of the build and the payoffs is impressive to say the least. Just prior to this moment, fans are treated to a slow burn chase sequence that explodes in a massive gun battle in a tunnel on a freeway that is just brimming with excitement and impressive visual flair, but the turnaround three way discussion between the leads might top it for the high point of the film. Credit goes to the directors for nailing the execution on both sequences.

Like the first one, Cold War II does not end on a massive action sequence like one might expect from a Hong Kong thriller, but it does play out its pieces like a chess match instead. With everything in play, the plot and characters converge at just the right moments for the tension and atmospheric dread to remain until it has all played out. It still has a handful of explosive moments left in the barrel for audiences here and there, but really the film never needs them as the interactions, writing, and performances are all strong enough to really make it feel fitting for the film’s approach. Who needs bullets when the plot unravels at the rate that it does to a satisfying conclusion? Not Cold War II.

Cold War II did something incredible and it topped its predecessor. Not that either is perfect, but both feel fresh and unique in their own ways without losing the better parts of their execution. The writing is layered and dense, the performances are both subtle and forceful, and the style of the tension remains a constant reminder of the talents of all involved. The inclusion of the new characters, including a powerhouse showcase for fan favorite Chow Yun Fat, establishes some welcome new ground for the series and it keeps things moving even when the film slows things down to engage the conspiracy elements for the audience. I wasn’t sure if they would be able to pull off another entry as viciously dense as the original, but Cold War II not only matches it…it leaves it frozen in its tracks.

Written By Matt Reifschneider
Posted by DarkReif at 10:50 AM