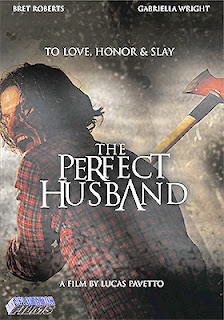 I will admit it now. The Perfect Husband had me. It had me tricked and the final scenes of the third act took me by surprise. Normally, this is a good thing. A film has you looking one way and it hits you from the other. For this little low budget horror film, it’s not necessarily a positive thing as that’s not quite how it works in the film, but the final portion of the third act most certainly saved it in some regards. However, I’m getting ahead of myself. For now, what you need to know for this introduction is that The Perfect Husband is a mixed bag of artful approaches to what boils down to an exploitation film. While the finale made me go back and watch it again (immediately when I was done the first time, I just hit replay) to see some of the detailing, this horror film still doesn’t quite knock things out of the park. Those looking for an ambitious movie are certain to find some things to love by what The Perfect Husband has to offer, but those looking for a movie that executes its ambitiousness may have to look a bit further – or just accept that this film comes with some significant flaws and run with it.

Nicola (Roberts) and Viola (Wright) have been struggling with their marriage since they lost the baby. Their mood swings are significant, they have ceased to communicate as well as they did, and their marriage is crumbling before their eyes. A weekend away at his uncle’s cabin in the woods to reconnect is the best solution. When paranoia, suspicion, and anger start to flare up though…their time together may not end in bliss as much as it will bloodshed.

As I mentioned, The Perfect Husband is ambitious, but the execution is floundering at times. It has a legitimate concept at its core, it’s thoughtful in its character building by giving each of its two leads issues to work on, smaller details that explore their psyche, and their interactions are strong in the first act as we see the cracks of their conflict. The acting even in this portion can be a bit hit or miss (and gets even more uneven as the film plays out), but that is the issue that arises with low budget horror. Luckily, the ambitious nature of its set up negates some of that and by the time the third act hits the performances seem to be more in the groove. Even when the couple first gets to the cabin and the paranoia between one another begins to grow, there is a tension that can be felt and the film attempts a subtle, slow burn build to get the audience hooked.

Then it drags on a bit too long. As the film progresses, it becomes less logical and the viewer's interest in their well-being begins to wane. The narrative flow begins to stumble a bit in the second act and the paranoia that leads to bursts of anger by the two seems to come out of nowhere with little to lead into them. By the time the third act started, I was disconnected from the two characters. Now, I will say this. The illogical character leaps and narrative flow bumps are MEANT to be that way in some regards. The finale of the third act, the twist if you will, makes that very clear. Things are not meant to necessarily make sense and the twist justifies some of it. This was the reason I watched it over, to see what else I might have missed. The problem leading up to that is that some of the jarring jumps of narrative still don’t necessarily work even with the ending in mind. On one hand, it’s too subtle to necessarily clue in the audience that things are not what they seem, but on the other hand, they are not subtle enough to feel at home in the natural progression of the plot and narrative. It’s a very fine line on second viewing that I felt the film needed a couple more drafts or a slightly different approach to get to work the way it was intended. Ambitious, indeed, but still flawed enough that it didn’t quite work out the way that it needed.

If you remember, I did mention in the introduction that The Perfect Husband does lend itself into the exploitation genre tag. This is one of those leaps that doesn’t quite feel natural to what the film wants, but horror fans are going to enjoy some of the off beat entertainment that it supplies. The first two acts most definitely focus on the slow burn tension and artful approach to building up the situation and characters. In a very stark and dark moment at the beginning of the third act, the film does a 180 and dives head first into exploitation territory when the husband goes berserk, tortures his wife a little, and then proceeds to hunt her down in a slasher-esque manner. Again, the finale explains some of this, but still the burst of violence at the end can be a bit jarring even when the twist is revealed. A sequence where the wife stumbles across a hermit in the woods might be one of the strangest and out of left field exploitation moments in the film even when it's explained as not what it seems later on.

While this film certainly deserves some praise for its ambitious approach that has the film start off in heavy drama territory only to morph into a psychological thriller and then emerge as a super violence exploitative slasher, when it’s all put together and done – it just doesn’t quite make the marks for it all to work. The final twist saves this movie from being a huge disappointment, so with the right expectations a horror fan should go in and enjoy it more than I did on my first watch simply knowing to look for the inconsistencies as part of the experience. With the right expectations and the ambitious artfulness of its exploitative pieces, The Perfect Husband can be an overlooked gem for the year as my second viewing was much more enjoyable than my first.