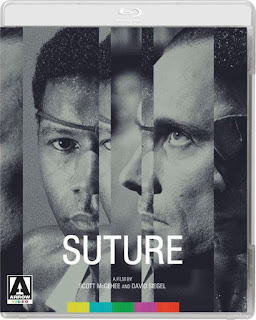 One of the beautiful things about doing coverage for cult cinema is that one gets to dig into the lost films. Films that are forgotten, overlooked pieces of ambitious and often edgy material. Sometimes they are forgotten for legitimate reasons, but sometimes they seem to be forgotten simply because they didn’t make a splash in the historical placement of film. Suture is one of those forgotten films, perhaps due to its lacking foundations as a film, but it’s one that carries such a strangely fantastical concept and an artful approach to it that it seems shocking that it hasn’t been one mentioned more often in the cinephile circles. The film is flawed, as many debut features from ambitious film makers are, but it’s something of an intriguing experience and one that more artful cinephiles will want to take another look at – particularly with this new Arrow Video Blu Ray that really presents it in such a strong manner. If anything, Suture is the kind of cult cinema that deserves to be uncovered…warts and all.

Clay (Haysbert) has traveled to Phoenix to meet with his half-brother Vincent (Harris). The two are identical twins, but their personalities couldn’t be more different. Due to an investigation that has Vincent paranoid, he plans to kill his brother, whose existence is something of a family secret, as a way to fake his own death. Things do not go according to plan though and Clay is left scarred from an explosion and lacking no memory of who he is and he’s forced, by situation, to take the identity of his brother.

Suture is the kind of film that is meant to be an experience. Visually, aurally, and conceptually, Suture crafts this intriguing atmosphere of artful deliberation. It’s a film meant to be utterly black and white in concept, where even the identical twin brothers of its story are black and white in skin color although the film makes it very clear that the audience is wrong in distinguishing them as such, but nothing is actually black and white and everything rests with the grays of its narrative approach. The film litters itself with black and white aesthetics including the film used, clothes, an ink blotch painting in the doctor’s office, and the contrast of bright Arizona days and the deeps darks of its nights, yet the concept is anything but black and white as it crafts an identity thriller where memories haze together, lives meld, and one man’s self-awareness fizzles. Even the music is meant to contrast and create those kinds of dynamics with bare percussion at times that leads into robust layered classical music. Suture is a kind of film that appeals in that artistic sense as it crafts some visually impressive and aurally dynamic beats worthy of its independent cinema feel.

However, as a thriller Suture is a bit flawed. It owes a lot of its strengths to its throwback style to 60s film, but it lacks a bit of the plot and character build to lift it out of being just an artful narrative experience. The performances are strong all the way around, including a memorable performance from Haysbert who has to carry a lot of the subtle strength of the film, but the film doesn’t write in a lot of backing to give the audience a deeper connection to Clay that’s needed to really hit home with the emotional journey that he must take with his identity crisis. At times, this seems intentional considering the subtle and simplistic approach that it takes to its script, but it undercuts some of the stronger emotional impacts that the film could have had. It makes for some intriguing moments, including how quickly the film seems to rush through its ending to wrap things up like its romantic subplot, but it leaves the film feeling cold and almost metallic. This in turn leaves the audience feeling the same way.

However, despite my own issues with the depth of the film, Suture is something that should be explored by fans of cult cinema. It has a lot of fascinating aspects to its style and approach, some of which will surely strengthen with time to digest them and tease them out, and the Arrow Video has a lot of strong special features that allow viewers to dig deeper into the film including slick half hour documentary about the making of the film. It’s not perfect, but for a debut film it’s whole heartedly ambitious and it deserves to be seen for that.