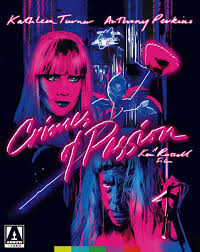 Director Ken Russell has always been known for pushing boundaries with his films. It's why his film The Devils has been buried by Warner Bros for so many years. Despite this key trait... and I’ll admit I’m not nearly as educated in his films as I ought to be, but I was excited to dive into Crimes of Passion and its recent (and packed) new Blu Ray release from Arrow Video. The film itself is something of erotic thriller, in the same vein as artistic ones akin to Dressed to Kill at times, but don’t go expecting it to be too artsy or too exploitative. Expect it to be both. It’s the blend of powerhouse performances and edgy approaches to its subject that make it stand out from many of its peers and it’s the strong execution, both onscreen and off screen, that makes Crimes of Passion such a robust piece of film to watch. It’s occasionally an uncomfortable watch, at times sliding into the realms of exploitation, but it’s such a well done film that it’s hard to deny it doesn’t express itself in a way that makes a connection.

Bobby (Laughlin) really wants his marriage to work. Money stresses with his floundering business have made it harder, so he decides to take some extra work investigating a co-worker for a friend. This ambitious young woman (Turner) works hard during the day, but at night…she transforms into a prostitute with chameleon like tendencies called China Blue. He also uncovers that she is being stalked by a mysterious Reverend (Perkins) who seems to have an unhealthy fascination with China Blue. 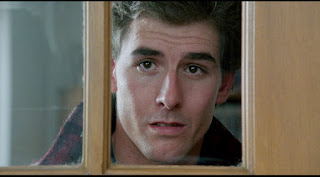 When it comes to erotic thrillers, there is a fine line that films have to walk. Fall too far to one side and it loses some of its audience because it’s too exploitative. Fall too far to the other side and it’s too artsy and it loses its edge. Some films balance it perfectly. Crimes of Passion finds the odd manner to perfectly make it feel unbalanced. At various times, this edgy thriller falls further into a more traditional drama realm, paralleling the themes of love, sex, and masks that people wear to find a connection, and at other times it embraces its more exploitative elements with almost vigorous intent. It careens back and forth across this line and never apologizes for it. It’s a maneuver that seems wholly fresh to me when it comes to its style and it makes Crimes of Passion instantly memorable.


It helps that the combination of director Ken Russell, writer Barry Sandler, and a cast that’s game for everything (and sometimes I mean everything, to the point that there was even one scene where I felt slightly uncomfortable) creates a riveting and often enigmatic stew of on screen chemistry and style. The bright luscious visuals that contrast the mundane everyday life of Bobby to the neon lit darkness and alien world of the streets at night that China Blue walks craft a setting worthy of exploring and it paints the themes with some broad stripes that hide some of the more subtle human details of characters that also careen between too real and too outrageous. Take the character Reverend Shayne as a prime example of this. A tortured soul of a holy man who desperately wants to “save” China Blue by executing her with a bladed sex toy? Perkins absolutely gives the character screen devouring abilities with his massive range of performance and it really does add to the parallels between the other two main characters. Granted, the film could have really solidified a connection between the Reverend and Bobby a bit more to craft that triangle that really hits it all home, but it still showcases what Crimes of Passion can do with its talents. It also allows Turner to remain the crux of what this film has to offer in terms of meaning and focus which is key to its success.

It also should be mentioned that this latest Arrow Video release is a stacked and definitive release for cinephiles interested in exploring such a unique and expressive piece of film. Not only does it contain the uncut version restored in HD, but it also contains the elusive director’s cut of the film with some substantial amounts of footage reinserted. The new footage is taken from an inferior source that dips in quality, sure, but just having the option to see this film in a new way is going to make a lot of eager cinephiles very, very excited. The film also boats a plethora of features worthy of a look including a great interview with the writer which stands out to add a lot of nice depth to the making of the film. 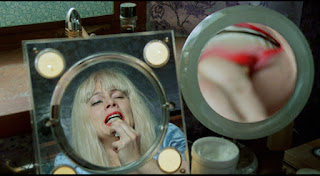 All in all while I have my own smaller issues with the film as a whole, Crimes of Passion is the kind of intense and ambitious film making that deserves a substantial amount of respect. It’s a layered and robust film with themes, truly jaw dropping performances, and style to be teased out and explored by those willing to dig in beyond the more exploitative elements. Throw that in with a release that has two very unique cuts of the film and a massive amount of special features from Arrow Video and this is likely to be one of the best releases to come out this year for cinephiles. It gets a hearty recommendation.