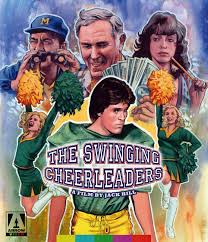 At this point, I feel somewhat ashamed that I never dug into the cinema of Jack Hill at an earlier point of my film life. I knew of him, knew of Taratino’s almost god-like worship of his work, and I had seen bits and pieces of some of his films, but really it wasn’t until late last year and my exploration of his film Spider Baby that I started to develop an interest in what he had to offer. Through some of Arrow Video’s other releases of his work (a particular nod goes to the robust release of Pit Stop here) a love bloomed for his ability to create smart exploitation cinema. Even then, I wasn’t so sure about his film The Swinging Cheerleaders. Sex comedies are certainly not my thing and the idea behind this film seemed gimmicky at best, schlock at worst. However, never doubt what Jack Hill will bring to the table because even though The Swinging Cheerleaders is both gimmicky and schlocky at times, it’s also fairly ambitious and occasionally funny for a sex comedy.

Kate (Johnston) is going to do the biggest expose that her college has ever seen. She has just been invited onto the cheerleading squad and she’s going to get the scoop on the horribly sexist and demeaning situation that the cheerleaders of a college have to go through…and perhaps throw the all-star football team under the bus while she’s at it. However, once she’s in she finds the world of cheerleading is both better and worse than she thought and she might just uncover a larger conspiracy with some of the faculty to rig a few football games for profit.

The Swinging Cheerleaders, despite some valiant efforts, still resides as one of Jack Hill’s weaker films. As a comedy, it’s a bit all over the place unsure of what kind of humor to focus on and coming off as the bastard child of a slew of subgenres. There is certainly some satire on hand and the film occasionally leads itself into some slapstick situations – including a fairly funny fight sequence in the third act, but this cheerleader exploitation film tends to follow the sex comedy formula with a rigid focus as our heroine learns the values of keeping an open mind and not judging others all the while making new friends and uncovering the real bad guys behind the football team conspiracy. It might also have some nudity thrown in to sell a few tickets so keep that in mind. It’s still an exploitation film at its core. You know the drill, I’m sure. In this sense, The Swinging Cheerleaders doesn’t inspire a lot of faith in actually crafting a film beyond the ABCs of the genre, at least on most of its surface level.

There are moments though when the smart Jack Hill direction and writing shines through to impress. For a comedy of this ilk, The Swinging Cheerleaders occasionally dips into some darker territory and touches on some legitimate themes and topics. It brushes on the sexism of ‘jock culture,’ the peer pressure issues of college, professor/student relations, and even goes as far as including a sequence about the dangers of sexual assault on campus. Granted, due to the nature of being a more mainstream and easily consumable product, the film never digs into any of these topics in a more meaningful manner outside of having them there. The intent is there and the film gets a few bonus points for being ambitious enough to include them, but it also points to a direction where The Swinging Cheerleaders could have been something even greater than the comedy it is.

For a sex comedy from the 70s, there have certainly been worse films to exist and the fact that The Swinging Cheerleaders even attempts to add some depth to what could have easily been sold as a silly comedy does add to it. Jack Hill has a knack for creating intriguing characters and films that rise above their exploitative genres, but there is a part of me that wishes this film would have even gone farther with some of these more intriguing commentaries instead of following the formula so rigidly. Still, fans of the genre and Jack Hill will find aspects to enjoy in this film and the Arrow Video release of it has plenty of great features and an impressive restoration of the film that cinephiles will appreciate. It’s not my favorite Jack Hill film, but this release makes up for a lot of the films flaws by treating it like it’s a cinematic genius…even if that can be a bit of a stretch at times.