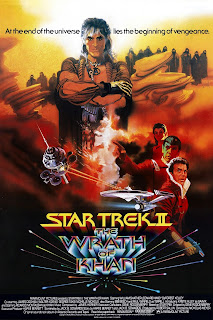 So remember all the things you loved about the Star Trek television series that the first theatrical film conveniently left out? Adventure? Fun? Characters? Pacing? Well, it’s almost like the film makers of the second film, Star Trek II: The Wrath of Kahn, had heard you because they rectify ALL of those things for this smaller budget, but massively superior sequel. While it’s not the perfect film that many of my Trekkie friends and colleagues might claim it to be (don’t get your underwear bunched up, we’ll discuss that in a second) it is easily one of the best science fiction adventure films to exist. It’s a film that knows its audience and knows its strengths, and plays into them. Even if you haven’t seen the episode of Star Trek that this is also a “sequel” to, this film is remarkably effective at almost everything it does and remains perhaps one of the biggest leaps of quality for a sequel over its predecessor in cinema history.

While training a new crew for the Enterprise, under its new Captain Spock (Nimoy), Admiral Kirk (Shatner) receives an odd distress call from someone in his past. It’s his past as Captain of the Enterprise that will come back with a vengeance once the villainous Khan (Montalban) reappears to take his wrath on the man and the ship that left him to die.

Just thinking about the difference between the first and second theatrically released films for this Star Trek franchise is something of a stunner. They are, while existing in the same realm of concept, about as different as you can get and Wrath of Khan is superior in every way. Perhaps the two biggest ‘fixes’ the film makers behind this film accomplished in this task were inter-character relationships and the pacing. This time around it doesn’t feel like an awkward meeting of old friends in the way the first movie had because these are relatable characters who have history with one another. While the film retreads a few themes that The Motion Picture used, mainly the idea that Kirk is destined to be ship Captain and his promotion to Admiral was a mistake, never does it feel old hat. The conversations and quips between the crew members are delightfully fun and smartly dramatic. New characters like Savvik, who is obviously meant to be New Spock considering Leonard Nimoy was very hesitant to come back, still work in some effective ways with the older classic crew. This allows the film to build some strong emotional beats into the story that give the fairly straight forward plotting depth and punch, which in turn develops into one of the most iconic third acts in science fiction history.

In this same vein, it has to be mentioned that the return of Khan crafts one of the best villains in cinema. Even while some of the secondary performances from the cast can be a bit cheesy or melodramatic, Ricardo Montalban destroys it on screen with gravitas and an over the top intensity that devours the viewer. He might not even show up in the same room as Kirk, but his conversations with a similar in over-the-top style of William Shatner are paralleled impressively where they battle in monologues and stares more than anything, but it works to create such an enigmatic tone that it’s easy to be pulled in like a tractor beam. The writing here certainly helps as the dialogue knows with its shorter run time that every word and beat of emotion has to count, but Montalban as Khan is easily the MVP of this film with his performance.

As I mentioned previous, not only does Wrath of Khan expertly navigate its larger cast with nimble precision, but the pacing is damn near perfect. There are a few plot holes left in the script that can be a bit deceiving – including a dramatic mini-plot featuring Scotty and a young crew member from engineering that was further explained in a cut scene from the film – but the effective nature of how quickly and efficiently this film moves has to be admired, plot holes be damned. The film remains exciting too, building mystery, expanding the universe by exploring its back catalog with Khan’s return (although it’s not necessary to see “Space Seed” as the writers accomplish its explanation in strong ways), and really crafting some great sequences like the two ship battles that commence in the latter portion of the film. This is truly a thoughtful version of a space adventure that blends the smarts and fun that Star Trek was known for previously.

After the resounding thud of Star Trek: The Motion Picture, it’s nice to revisit The Wrath of Khan and enjoy what Star Trek had always done well, a swashbuckling space adventure with enough swagger and layers to be enjoyed again and again. Outside of a few plot holes and some secondary characters that are left hanging a bit, The Wrath of Khan strikes it home with plenty of scene stealing performances and a brisk pacing that really works on a multitude of levels. Considering it has been almost ten years since I’ve revisited this franchise, this is starting to get a bit fun. Hopefully the next installment, which was a childhood favorite of mine, remains as strong as I remember like this one is.

Written By Matt Reifschneider
Posted by DarkReif at 8:07 AM