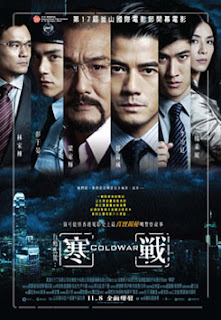 I’m not sure I have ever experienced a political police thriller quite like Cold War. The police thriller is something that is pretty common and it’s one that that has been a staple of Hong Kong cinema since the 80s with directors like Johnnie To and Dante Lam continuing to carry the brunt of the artistic load of the genre, but Cold War is a bit different. While the previous two mentioned directors side heavily on subtlety (To) and the bombastic (Lam), Cold War approaches the style with speed. Thrillers aren’t necessarily known for their speed, but this one is a sprint. The execution is strong enough to carry a lot of the logistics to keeping a pace like this film uses and it crafts a memorable film with enough twists and shifts to keep even the most educated cinephiles rocking on their heels.

Lau (Aaron Kwok) and Lee (Tony Leung Ka-fai) are next in line for the police commissioner of Hong Kong, but when the current commissioner is out of town on business and a van of five police officers goes missing the two very different style of law enforcers will end up against one another on how to approach it. The time is ticking, the pressure is on, and nothing is what is seems. Can Operation Cold War be successful when politics becomes involved or is it just a clever cover up for something larger on hand?

This film does not waste any time. The opening sequence introduces us to the kidnapping event and from there, it’s almost non-stop tension, thrills, and spins for the narrative and it rapid fires through the various characters and plot points needed to keep the movie moving forward. If you are not willing to spring out of the gates, absorb the subtle details of the dialogue, and put together the pieces of the plot progression at full speed, then Cold War is not going to be the film for you. The film utilizes a lot of modern techniques to pull this off and relies on an audience that can consume and filter a lot of information for it to work, but if you can keep up it makes Cold War feel like something of a fulfilling marathon event film.


Outside of its speedy intent to never let the audience get a breath in-between character clashes and plot twists, Cold War is an extraordinarily well executed film. Directors Sunny Luk and Longman Leung ably navigate the pitfalls of such an intent by keeping everything clear and focused in each scene so that the audience doesn’t get confused with the bombardment of details. The backing details on each character are presented in subtle bits of dialogue so that flashbacks or other time consuming devices are not needed and the performances across the board are just as intense as the narrative. The chemistry between Aaron Kwok and Tony Leung Ka-fai is breathtaking and that elevates the film higher. Even when the few instances of action pop up, including a very slick car wreck in the opening sequence and a drive by shoot out during a money exchange in the latter half, they are impressively shot and directors Sunny Luk and Longman Leung don’t hesitate to NOT CUT to add to the chaotic tension. The execution in Cold War sells the entire thing.

Cold War might not be the kind of action thriller that audiences are used to getting from the Hong Kong market, but it’s espionage styled focus and plot maneuvering builds enough tension that it will keep you on the edge of your seat – even when it’s just characters jockeying for political position during a time of law enforcement crisis. It’s a film with strong production values, powerhouse performances, and two directors who can streamline it all while maintaining a break neck speed for almost the entire film. Sure, some of the plot twists might seem predictable for a thriller, but Cold War presents them in such a way that it still feels fresh and effective. The true sign of strong execution in a film.