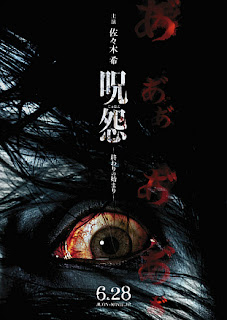 The Ju-On series was one that didn’t necessarily need a reboot. The Black Ghost/White Ghost combination of spin off stories proved that the extension of the curse concept could work on some level. However, after watching the reboot of the franchise subtitled The Beginning of the End, I can’t say that the film itself was nearly as bad as some of the reviews lead me to believe. Ju-On: The Beginning of the End is still a creepy and occasionally clever entry into the series and one that ought to appease the more open-minded fans of the series. At times it can be a bit awkward, there are a few sequences where the execution doesn’t quite sell the idea (like seeing a giant vision of your dead friend on the subway train as a giant head), but the rest of the film retains a lot of the same atmosphere and creepy moments that the series is known for albeit from a slightly modern angle. The film is also told in the same broken segment structure that made the original ones work so well. Once again, the way that it’s told makes for a stronger mystery for the film and how it reveals its plotting as it jumps around a bit gives the audience a task to put the pieces together. Better yet, instead of being just a straight forward remake, The Beginning of the End also tries to re-establish some of the storyline that fans will already be familiar with. Instead of Kayako being the main antagonist, the film focuses more on the son Toshio as the horror driver and how his influence was the one that brought about the curse that plagues the house. While explaining the back story a bit more can be too revealing for the normally vague style of J-Horror, the new spins and twists on the plot are a welcome change of pace for the reboot that gives it some life instead of repeating the same thing again and again. Ju-On: The Beginning of the End is far from perfect and it is occasionally awkward, but still it’s nice to see Kayako and Toshio back in the haunting business. 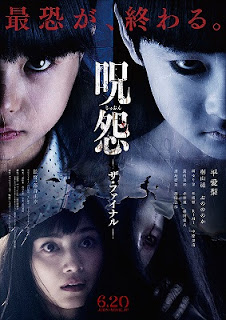 Seeing as the first reboot film wasn’t nearly as bad as I was expecting, particularly from reading some of the reviews, I went into its sequel – called The Final Curse – with a decent amount of hope. The Final Curse, or The Final as I have seen it called at times, is a solid follow up to The Beginning of the End and works as both a continuation of the evolved story and as a direct sequel. At this point, it’s pretty obvious that these films are going to feature certain kinds of characters at the helm – the curious school girls, the amateur detective, etc. so it’s not so surprising that this one retreads some of the same ideas. It doesn’t quite have the weaving reveal to the various stories that The Beginning of the End worked out, but the further exploration of the new narrative that features Toshio as the main antagonist leads to some fresh feeling moments that work better than anything in its predecessor. The film also tends to pull away from some of the cheesier kill sequences, although there is one in a karaoke bar that’s kind of random, so that helps create a slightly more cohesive atmosphere that works. There are a handful of scary sequences that are very well shot including a scene with a mother and daughter in the kitchen that has some great set ups and pay offs. The Final Curse is slightly better than The Beginning of the End and it still shows how much life there is in the Ju-On franchise. It’s sad that this one seems to be the end of it for now (with the recently released Kayako vs Sadako that works outside of the franchise) as I quite enjoyed this one too…even with some of its cheesier awkward moments.

Written By Matt Reifschneider
Posted by DarkReif at 11:20 PM