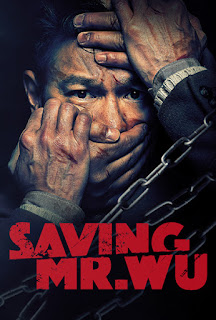 Ding Sheng has quickly arisen to be one of the most talented and refreshing voices from the Chinese film market. He crafted a Jackie Chan double impact with Little Big Solider and Police Story: Lockdown (yes, I will defend the latter as a strong thriller, even if I am in the minority) so partnering up his gritty and grounded thriller style with the true story about an actor kidnapped for ransom along with the acting powerhouse of Andy Lau only rocketed his latest film, Saving Mr. Wu, into my ‘must see’ list. Fortunately, the film never disappoints either as Ding Sheng channels a modern spin on the classic thriller foundations of the film. It’s a gripping film, moving with a gritty yet graceful speed, that spins a smart and impactful thriller worthy of the talent behind it.

Mr. Wu (Andy Lau) is a famous actor trying to blow off some steam one night when he’s approached by four gentlemen in a parking lot. Soon, he’s at the hands of four criminals desperate for some cash and willing to do whatever to get it. It’s a race against the clock as the police attempt to put together the pieces to find a high profile kidnapping while Wu and a scared second kidnapping victim (Cai Lu) haggle with the gang’s leader (Wang Qianyuan) for their lives.

Throughout the entirety of the film, a reoccurring thought flashed in my mind again and again. Ding Sheng directs this film like Michael Mann should direct his newer films. Should is the key word, mind you, because Michael Mann has been pretty disappointing since Collateral. Yet, the style and approach is remarkably similar. Saving Mr. Wu is very much a modern thriller as it moves at a rapid pacing right from the start, introducing characters as it goes rather than stepping away to do so, and it uses the gritty and grounded style of realistic tones and visuals to give its “based on a true story” plot more impact. Those who don’t enjoy this style may not love the film as much, but it’s effective for the approach that it takes. The structure is perhaps the largest, but most fulfilling, obstacle that the film employs. It leaps back and forth in its time line, starting with the kidnapping, moving into the finale and then leaping to before the kidnapping event, etc., and it gives the film a much more dynamic approach to its rather straight forward kidnapping plot.

What these two things, a gritty, grounded style and dynamic narrative, allow Saving Mr. Wu to do is craft a film where the tension is almost consistent throughout the film. There are certainly a handful of more exciting moments including a scene where the police are trying to approach one of the kidnappers on the street, but this film only fringes on action elements. Instead it focuses on layering in thriller aspects that keep things feeling anxious and emotionally frazzled. It’s powered with some impressive performances all the way down into the smallest characters and it carries the film. Wang Qianyuan oozes an evil charisma as the lead villain of the film and it balances out the heroic to a fault elements of the police that are tasked with saving the titular character. This fast and off the cuff character build and performances allow the suffocating atmosphere to balance out perfectly though with a human element that has to be mentioned. At one point, there is a scene where Andy Lau’s Mr. Wu sings a song to his fellow kidnappee that highlights the film. Is it the most exciting set piece in the film? No, but it is the most impactful one as it showcases a layer of humanity that too many thrillers lack and Saving Mr. Wu embraces in spades.

Ding Sheng is on a war path with his filmography. He embraces a modern and gritty style and overlays it on classic thriller corner stones that make his films some of the best that the Chinese film market has to offer. Saving Mr. Wu is another impressive addition to his career that takes the best of modern intensity and mixes it with a human focused and dynamic narrative that carries a lot of impact in the film. It’s a film brimming with talented artists and while I’m sure this is a film that will go horrifically overlooked as one of the better films of the year, Saving Mr. Wu is deserving of much more. See it.