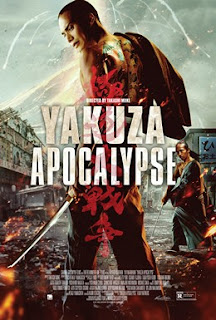 Takashi Miike remains one of the most ambitious, if not insane, directors working today. The man puts out two movies a year (I think that might be his minimum) and the sheer eclectic nature of his films, whether it’s style, genre, or approach, makes each one a rather riveting experience no matter if the quality is great or not. Going into Yakuza Apocalypse, I expected a rather serious mix of horror and dramatic action with perhaps a bit of the exploitative elements that Miike used on the yakuza films of his early career. However, Yakuza Apocalypse is not held back by genre as it goes for broke on insane set pieces and awkward bits. It’s a very in-cohesive film that suffers from its leaping genre bends and hanging plot threads, but I have to admit – this still might be one of the most entertaining and vicious film experiences that I’ve had with his material.

Akira (Hayato Ichihara) always wanted to be a man and his arrival into the yakuza was a way for him to fulfill that need. However, when he finds out his boss is a vampire and is being hunted, he is going to have to step into a whole new world that is…a little different.

Yakuza Apocalypse starts off as one might expect. It’s a fairly straight forward yakuza film, perhaps inspired by the yakuza films of the 70s, and it’s played with a very straight face. It’s violent, the opening fight sequence with the glorified boss is brilliantly established and shot, but it’s very serious. As the vampire aspects of the film come to light, usually in somewhat subtle ways, the film adds in a layer of ridiculousness that seems to fit nicely with the darker yakuza tale on hand. The performances of our main protagonist and the secondary characters (particularly the boss and a young woman who is left hospital bound after she is assaulted) carry some solid foundations of a much greater crime drama on the edges. This first act is Miike doing what I expected from the film – balancing a bit of his patented dark humor, horror, and dramatic thrills.


However, this film is obviously not content with playing things in a fairly by-the-numbers affair no matter how great the execution it might be. Soon we are introduced to two bounty hunters (one played by Mad Dog himself Yayan Ruhian from The Raid fame) and things start to get unusual and a bit cartoonish. The vampire elements quickly rise to the surface and go to outrageous lengths. The villains of the film only add to the chaos. When the big bad appears in the third act, a man in a giant frog’s outfit and proceeds to beat and kill the ever living shit out of everything in sight, it’s almost expected. The film drops a lot of the great plot threads that it started weaving in the first half (including the romantic subplot that was working so well) and goes full out in its action/weirdness. I mean, there is a moment where the frog guy, who never says a word might I add, knocks away bullets from a mini-gun with nunchucks. It’s that kind of film.

Unfortunately, the shifts in tone, dropped writing elements, and failure to capitalize on building the mythos of its vampire elements make Yakuza Apocalypse a massively flawed film. However, for all of these elements it remains a massively entertaining and insane film that has stuck with me since I watched it. I laughed, I cried, I winced, and I cheered. And give or take, did them all at once. It’s not necessarily a great thing, but it is what it is and Yakuza Apocalypse is Miike at some of his craziest.

Written By Matt Reifschneider
Posted by DarkReif at 11:18 AM