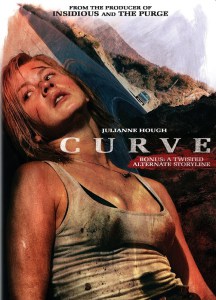 Whether you love them or hate them, the Blumhouse production company is something of the face of mainstream horror currently. They produce low budget films that garner big budget returns like Sinister, Oculus, Insidious, and other films of the like. However, their track record is much more hit or miss when it comes to quality and even they know it. This is why the company dumped a handful of films straight to Netflix Streaming this month. While these movies are smartly pulled due to lacking mainstream appeal, that doesn’t mean they are terrible films. Just take Curve as a prime example. Sure, this little survivalist slasher flick ended up on the Netflix train due to some of its cliché elements and odd moments, but it’s still a decently entertaining film that horror fans will want to check out as a potential overlooked gem of 2016.

Mallory (Hough) is driving through the canyons on her way to Denver, looking forward to and thinking about her upcoming wedding. When her vehicle breaks down though, she needs the help of a charming hitchhiker (Sears) to get back on the road. However, this hitchhiker is not all that he seems and soon she is caught in bad situation with no place to go and killer intent to torment her.

Curve starts off a bit rocky. After the initial set up of a soon-to-be-bride thinking and pondering her unsure future, it essentially goes into slasher 101 territory. The charming killer hitchhiker, the hostage situation, the growing tension, it’s all here and none of it is horribly original. Julianne Hough does the pretty damsel in distress to a ‘T’ and Sears steals most of the moments in the first act with his oddly disturbing positivity as a killer. It’s not bad, but it’s certainly yawn inducing for experienced horror fans as the film establishes all of the basic pieces for a slasher flick in some of the most general ways.

Then Curve takes a fun twist for its second act. The film goes into dramatic survival mode when our heroine gets trapped in her car and has to figure out how to survive when she’s upside down with her leg pinned by the seat. The killer at this point becomes less of slasher stalker and converts to a sort of emotional vulture where the torture he invokes on her is about dangling hope instead of the straight forward physical harm. While it is still not original, there is plenty of these kind of films out there about surviving with nothing and solving problems and comparisons to Wolf Creek will obviously be made, it does feel rather fresh in what I assumed would be a standard cat n’ mouse slasher flick. It builds some solid tension and when the film returns to the slasher tone for the third act it feels renewed and energized.

Curve is not necessarily a film that’s going to garner a lot of attention and there will be those detractors that pick apart the plotting, characters, and obvious plot holes (like a weird twist that involves bear traps), but it’s also a film that attempts to throw some new twists into what might have been a standard slasher film. Considering that the director was the one that gave such modern “classics” as The Skeleton Key and Inkheart, I have to consider myself pleasantly surprised with how much I enjoyed Curve.