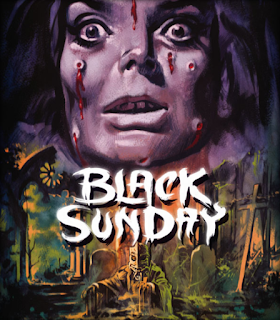 As my Mario Bava-thon continues, it seemed fitting to go back a little in his catalog and look at his “debut” film Black Sunday – or as it’s called in some markets, The Mask of Satan. I say “debut” because he was known for finishing a plethora of various films prior to this one (including I, Vampiri which is included on the Blu-Ray/DVD combo pack from Arrow Video), but really it’s Black Sunday that showcases a film that is fully Bava throughout. Even then, Black Sunday is the fairly flawed film despite the strength of director Bava and it’s not one that may immediately grab some of the more discerning cinephiles. Don’t write it off though as the Universal/Hammer Italian knock off that it would seem to be at times because Black Sunday still carries some great elements to make it a slick cult film.

A couple of doctors (Richardson, Checchi) find themselves stuck in the middle of Moldavia at the wrong time. In the midst of their exploration as their carriage is fixed, they discover a crypt and accidentally awaken an evil woman (Steele) hellbent on coming back to the land of the living through the nearby family of royalty. Now they will have to uncover just who she is and figure out how to defeat her before she returns to life.

In a lot of ways, Black Sunday is a hodge podge mixture of various popular horror films that came before. There’s a little bit of Dracula, a little bit of The Mummy, and various other films and it’s obvious that this film is more or less a cash in on the popularity and style of those films, particularly the boom of horror films happening at Hammer a few years prior. In a lot of ways, this mixture of influences gives the film a rather muddled narrative. Throughout the runtime I was trying to figure out if the evil woman was a witch, a vampire, or something else and Black Sunday seems intent to keeping those things on the down low or throwing in bits of each instead of embracing a new kind of mythology for it. So don’t expect the film to explain things outside of the basics of the plot to get things moving.


In a way it’s somewhat frustrating as the film fails to flesh out some of the questions that the audience has with the character interactions or the mythology of the Satanic “monsters” intent on killing folks. However, at times this vague plotting and occasional vague characterization is a benefit to the film. Instead of simply following the structure and formula established in other classic monster movies, Black Sunday burns its own path and this allows Bava to do what he does best: atmosphere. With slabs of gothic imagery and set designs that seem far too detailed and complex for their own good, this film uses its design and how Bava shoots it to create an atmosphere that fully encapsulates the ‘another time, another place’ aspect of the film right down to its black and white color scheme. Sure, the romantic subplot might be a bit weak, but who cares when this film adds a sense of mystery and vague horror to it? Yeah, the twist of having Barbara Steele play the damsel in distress and the evil undead mistress wraps up in very predictable ways, but who cares when every piece of the plot and performance only adds to the tone of the film? That’s the key to Black Sunday’s success and the more I think about it, the more it overrides the glaring flaws of its script.

While Black Sunday is definitely a flawed film as it quickly brushes over the deeper elements of its writing and performances, the film will instantly appeal to those cult film fans or those that are addicted to the old school style of horror films like Universal and Hammer knocked out decades ago. The Arrow Video release really adds a lot of great information about the film with in depth articles, a fantastic transfer, and an entire second film, but the true star of this film is the atmosphere created by director Mario Bava – and it’s worth the look for cinephiles simply for that. The rest is just icing on the cake.