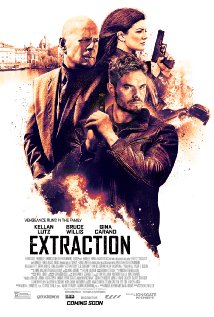 At one point in his career, having a movie with Bruce Willis in a smaller role would have been something to really get excited about. However, in the last decade Mr. Die Hard has done nothing much more than phone in performances and take bit roles in mediocre straight to home video action flicks. Even his bigger films like A Good Day to Die Hard are dragged down by his obvious I-Couldn’t-Care-Less attitude. In the case of a film like Extraction, we have two mediocre young action stars in a middle of the road movie that desperately needed a charismatic anchor to support them – and Bruce Willis is NOT that guy despite the fact that his name still seemingly sells films. In the end, the film is a lacking charismatic hook and that drags Extraction down – even when it has some fun moments for action fans.

Harry Turner (Lutz) has been desperately trying to get a field agent position in the CIA for quite some time. He’s fully capable, if not over qualified, to be one of their best, but he consistently finds himself rejected. When his father (Willis), a legendary CIA agent in his own regard, is captured and held hostage in a botched assignment, Harry is going to have to go rogue to free him.

Truthfully, I didn’t have the highest of expectations going into Extraction. The three big names attached, Lutz, Carano, and Willis, have all had their fair share of cringe worthy action roles in the last few years and the plot itself seemed pretty formulaic. However, perhaps due to these low expectations, I found myself pleasantly surprised with the film in some regards. It’s not that good, at least not by classic film standards, but it is decently entertaining for action fans. There are quite a few decent action set pieces to be found here, including a nice one-on-one fist fight in a bathroom, a bar fight, and there are some fun stunts on hand here. Lutz tries his best to be the charismatic action lead that he occasionally shines through as and the film moves at a ridiculously fast pace. If there is anything that Extraction has going for it, it’s at least entertaining enough.


Unfortunately, being entertaining is only part of the battle in the scheme to be a good movie and there are three things that truly hinder Extraction from reaching some of the heights it should have reached. Firstly, the acting is horrendously hit or miss. While I have a soft spot for Lutz in low budget action (I still stand by Java Heat as one of more entertaining straight to home video action flicks I’ve seen in a long time), Carano is pretty bland in the film and Willis, like always, sleep walks his way through the film. Some of the poor moments of acting in the film are exasperated by the second reason that Extraction stumbles: the writing. Not only is the film formulaic in its plotting, it’s not very good at doing it. A romantic side plot between Lutz and Carano is forced and awkward, the film lacks a lot of flow when going from scene to scene, and the big conspiracy plot lacks a lot of energy in the finale to sell itself. Even with these issues though, a film can pull through with the right style…and that’s the last of the big issues. Director Steven C. Miller, who has crafted his fair share of very entertaining horror and thriller films like The Aggression Scale and Silent Night, pulls away from his ability to take modern style and build tension for the sake of Extraction’s fast pace and action. He edits too much, he shakes the camera too much, and while it’s a style that sells right now in action – it undermines a lot of the better things that the film has going for it.

Extraction could certainly do a lot worse as a straight to home video action flick. It has a decent amount of charm to its proceedings and its fast pacing and fun action pieces make for an entertaining flick in the end. However, it’s not going to be a film that action fans think of when they think of best action of the year as it’s ultimately a fairly forgettable experience. Kind of like Bruce Willis in the last ten years, it goes through the motions with limited excitement for the proceedings.