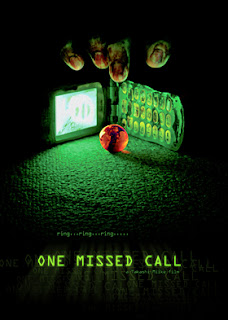 The J-horror explosion of the 2000s was a big key to my exploration of foreign film markets. Films like Ju-On and Ringu paved the way for me to start exploring a lot of different styles of film in my teenage years and so I will always have a soft spot in my heart for the genre as a whole. Yet, one of the strangest and most challenging films from this boom is Takashi Miike’s One Missed Call. The American remake couldn’t possibly try and translate its often odd story for American audiences and even to this day I find this film’s social commentary and strange twists to be off setting at times. Leave it to Miike to take a fairly formulaic and popular horror style and throw his own spin on it to develop a rather silly concept to make an impactful film. A film that shockingly holds its own to this day.

For Kumi (Kou Shibasaki) and her group of friends, it’s normal life with social gathers and school. However, her friends are starting to get unusual calls and messages from their own numbers – messages that tell them when they are going to die under mysterious circumstances. Now it’s up to Kumi with the help of another man who lost his sister to the same effect, to unravel a mystery and unveil the angry spirit that’s slaughtering people.

At the core of the film, One Missed Call is a fairly familiar concept for J-horror. Pissed off female entity, brutal deaths, creepy atmosphere, and a murder mystery for our amateur detective protagonists to solve to save the day. However, whenever the name Takashi Miike is attached to a film, never ever expect it to simply go by the book. As the film starts off, it very much sticks to this formula albeit with that Miike visual style and attention to detail that really makes it feel like a stronger candidate for one of the best that J-horror has to offer. Our heroes are established, bit by bit, and the performances are strong enough to carry some of the sillier moments in the film. The idea of a death-warning that comes to your cell phone sounds ridiculous (and it is), but One Missed Call does a very impressive job at selling the tension and mystery around the horror gimmick. The visuals are effective, the horror is justified, and there is even a bit of jaw dropping shocks to keep the audience on their toes. As a horror film, it sells itself nicely.


There are a few times during the film that you have to wonder if Miike simply picked this film as a challenge to inject some thoughtful under tones and plotting for the audience. It’s not only a film that slathers on atmosphere and some creepy elements, it also seems to have a slew of different messages. The cell phone and technophobia elements are fairly obvious, but there are running themes about domestic violence and family that run rampant throughout the film. There is even a fairly scathing criticism of how the Japanese culture treats the horror of these events by having one of the girls marked for death appear on a televised exorcism that seems less intent on helping her and more intent on selling the “curse” as a gimmick to its uninterested audience. Needless to say, things go a bit bat shit crazy and the horrors become all too real for everyone.

In true Miike fashion though, don’t expect things to be tied up nicely in a bow as he constantly shifts the film’s tone into some artistic directions too. It’s not all J-horror tropes and violent material here (there is an arm breaking moment that still makes me cringe) and the film ends on a rather vague and open ended note that will have many people scratching their heads about what exactly happened. It’s classic Miike in this sense.

All in all, One Missed Call ends up being one of the more unique J-horror films in existence. It takes the core foundational formulas and spins them in some odd and off beat ways to create its own little niche style and approach. It’s a film that is much greater as a whole than its separate parts and the execution of its gimmicky concept is much better than what should be expected for a film about killer cell phone messages. Go into the film with an open mind and an eye for the little details and you’re sure to have a fun time with what One Missed Call has to offer.

Written By Matt Reifschneider
Posted by DarkReif at 8:40 PM