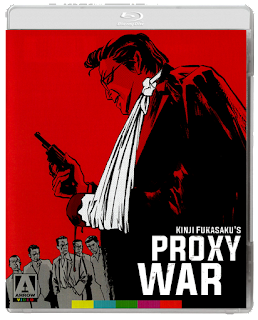 The continued evolution of the Battles Without Honor and Humanity franchise is something impressive to behold. Director Kinji Fukasaku and writer Kazuo Kasahara have continued to not only mine their gold mine of yakuza stories, but they have really told an overarching tale that interweaves into a spider’s web of deceit, loyalty, and death. This move is taken to the next level in the third film of the series, Proxy War, and while the style is familiar, this film is a fairly effective departure from some of the key elements that made the first two films so impressive. The results are not a lessening of the franchise, but a new direction that follows the growth of the characters and plotting.

When the boss of the Muraoka family is killed, Uchimoto refuses to avenge him and instead ends up swearing allegiance to Akashi gang. This leaves tensions at an all time high between the Muraoka clan and the Yamamori clan and it leaves Shozo Hirono (Bunta Sugawara) as a mediator between the two. However, as both sides begin to boil over, nothing will stop the oncoming bloodshed.

Proxy War is perhaps the most complex of the Battles Without Honor and Humanity films in the series thus far. The writing in this film is complicated, to say the least. The film does not spend hardly any time catching up viewers with the events of the first two films (although the first one being more key than Hiroshima Death Match) and it leaps right into the already complex relationships between our main protagonist Hirono and his yakuza colleagues. From there it only layers on the various shifting alliances and characters that exist in not just one or two groups, but a whole cluster of them. Going into the film, make sure to keep your keen thinking caps on because it will name drop and character reveal a ton of people to remember as the various discussions commence.  One of the pleasantries of the Battles box set from Arrow Video is that there is actually a flow chart in the booklet that sifts out all of the various alliances that occur in the films – and I found myself referencing it a few times after Proxy War was done to make sure I understood exactly what transpired in the film.


While this tone of uneven grounding with how the characters must retain their footing remains the same throughout all of the films thus far, Proxy War takes a new tactic at crafting the atmosphere of paranoia and sense of unease. Instead of littering the film with bursts of violence and using an overwhelming amount of the documentary style of shaking cameras and gritty visuals (like the previous films did), Proxy War instead opts to ground most of its tension through dialogue and performances. While this makes for a film that is a bit slow to get moving at times, the stellar performances and the tight writing really work to the film’s benefit. There are definitely a few yakuza battles to be found – and the finale is another great moment of relief despite it’s obvious “to be continued” vibe – but the film is much more focused on the character interactions around a table than it is in showing the conflict of the streets. While it generally makes for a less exciting film in more general terms, it does really show off the insane abilities of the director, writer, and cast to sell its concept.

Proxy War, while still using the same overall style and look as the previous Battles Without Honor and Humanity films, is a more resigned and intentional flick about its dueling personalities and the complicated chess maneuvers by its characters. It’s driven by a phenomenal script and some great performances, but the film does feel slightly less exciting and a bit too plodding when compared to the first two. It would seem that this film is often seen as the best of the franchise by critics and fans. Judging from some of the execution on screen and in its writing, this isn’t hard to imagine when it comes to the artistry of cinema. However, for this reviewer, Proxy War’s change of intention makes it slightly less enjoyable than the previous two. It’s still a great film, but the entertaining elements can be a bit sparse here.