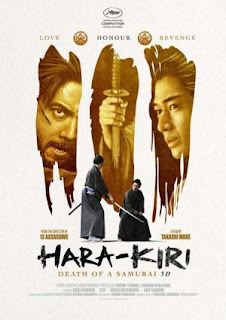 The career that Takashi Miike has built for himself started in the trenches of straight to home video exploitation entertainment, but it has not remained contained to that kind of ideology. Often enough he returns to it to accomplish a variety of different films, but it doesn’t define his career in whole. In fact, he wholly brought the classic samurai genre back with a vengeance recently with a double dose of samurai film remakes. His first, 13 Assassins, was a stunning epic built on phenomenal character drama and a blood soaked finale. His second film, Hara-Kiri: Death of a Samurai and the focus of this review, is even more subtle than the first. Gone are most of the violent and over the top grotesque elements that Miike built his career on and in their place is impeccable atmosphere and a heartbreaking narrative that is as potent as anything he has delivered on film. This leaves Hara-Kiri one of the best films in Miike’s long and diverse catalog.

When a ronin (Ichikawa Ebizo) appears at the doors of the House of Ii asking to use their courtyard for suicide, they are reluctant to allow him. Just two months prior they had an incident with another young ronin asking for the same request. However, something seems amiss with this latest caller. He has a story to tell the various individuals of the house - a story that involves the young samurai from two months prior.

One of the tricks about Hara-Kiri, as a film, is that it whole-heartedly pulls away from being a big swordplay kind of samurai film. This might be disappointing to some and even by the time the big “fight” comes around in the finale it’s well established that it won’t be the kind of action you might expect. So keep those expectations in check when going into the film. Intriguingly enough, it’s obvious from the get go that Hara-Kiri doesn’t need a top notch body count to be as emotional effective in its portrayal of the fall of the samurai – or in this case a specific samurai. While death is an overarching theme that threads its way throughout the film, the loss of the physical body or the taking of life is a much more social and philosophical question at hand versus the physical one that audiences might expect. This isn’t a film about a samurai who wants to take his own life or even the lives of those who have wronged him, it’s a film about a social class system that has already taken his life away and the process by which that happens. This makes Hara-Kiri a much, much deeper film than what it showcases on the surface.


Outside of its thematic grace, Hara-Kiri also executes its narrative in a very effective manner. Half of the film is told in flash backs, although not nearly as cheesy as it might seem, and it makes a lot of sense as it pieces itself together for the audience. The film is powered by some great performances, subtle for a lot of the secondary actors and featuring a strong arc for Ebizo, and Miike – like always – has an impeccable ability to craft a realistic and still symbolic energy for the visuals of the film. Don’t expect the manic feel of some of his more popular films, but Hara-Kiri carries a heaviness in its tone and visuals that hits the narrative in a way that couldn’t have been nearly as effective if done otherwise. This is a film about losing purpose, done with the realistic and mastery of a director who understands how all of the layers need to fit together to make it cohesive.

While Hara-Kiri doesn’t feature any huge action set pieces or feature any instantly memorable gimmicks, it is a samurai film that carries the heart and soul of simply telling a beautiful and heartbreaking tale of generation caught in social transition and the repercussions of it. Hara-Kiri is as effective as it can be and it adds so much layering, depth, and symbolism to what might have translated as a formulaic period drama. It’s the perfect companion to 13 Assassins and one of the best samurai films ever made.