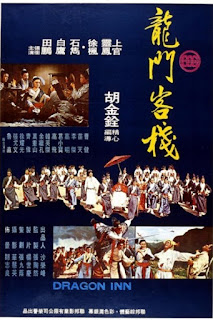 Since my interest in more art house films started to increase greatly over the last couple of years, I sort of let my 1st love of cinema sit on the back burner, which is the martial arts genre. I love any type of martial arts movie: old, and new; more grounded realism, or wu xia style, wire-work heavy films. That being said, I have also become a stickler for quality when watching said movies, so the ones I enjoy become fewer and fewer. At some point, last year, Eureka Entertainment said they would be releasing two of King Hu's Taiwanese wu xia films: Dragon Inn, and A Touch of Zen (which just came out as I write this). Having a recent interest in Taiwanese cinema, and the fact that Taiwan has been working on a ton of restoration of their classic films, I jumped at the chance to see them, and with Dragon Inn, I am very, very glad I did.


One thing to get out of the way with this film going in, is its plot. It doesn't really have much of one, and to be honest, though I saw it only a couple of weeks ago, I can't quite recall the exact 'who is doing what' of the movie. Essentially a general is killed by his fellow Eunuch, and the general's children are exiled. The eunuch aims to have the children killed off completely, but little does he know that some badass secret police folks are waiting for him at the Dragon Inn, which is sort of the crossroads building where seemingly infinite bad dudes tend to go when looking for a nice meal, a good drink, or someone (or multiple endless someones) to throw down with. Like I said, the plot's pretty basic, and isn't really important to the film, which is usually not a good thing, but here, it completely works.

What we get in place of story is atmosphere, incredible tension, some silly but effective humor, and a whole lot of people killing each other. What more could you ask for with a film like this? Now, I can't keep track of who is who, and what each characters names are, but those interested in this film probably can follow along with whom I am speaking of from here on out pretty easily, as the characters aren't really defined by who they are and an arc they will have (which none end up having), but rather what their costume is and what kind of weapon or basic characteristic they have.

You have a man who fights with an umbrella, which conceals a Zatoichi style blade within, which often left me having a goofy grin on my face when he fought, which happens over and over again. Also, one of the most badass female fighters in any martial arts film hands down is pretty much in the forefront of this movie, in that woman disguised as a man thing that movies of that era often did, and she pulls off her physical prowess quite phenomenally, and she in the end ended up being my favorite character. Every time she fought, I would verbally express my excitement and cheer her on, which I usually don't do when watching anything.

Another thing about Dragon Inn that I really admired was the scope of it. Instead of the usual Shaw-style sets from (well many a Shaw Bros. production), you get large, sprawling, absolutely stunning landscapes with the martial beasts and heroes roaming throughout its varied rocky mountainsides and hilltops. The location of the inn itself is quite memorable too, with it sitting essentially in the middle of nowhere, but surrounded by some very large rock formats. It seems as if Mr. Tarantino were inspired by this film for Hateful 8, only giving it a The Great Silence style blizzard instead of the desert-like setting found here, and also that inspiration seems only further in the fact of various people of great skill showing up in a small setting due to weather conditions, only to have the tension ratchet up to 11 and has everyone and their brother sweating balls in hopes that they aren't ferociously cut down in the twitch of the wrong facial muscle, gesturing shadiness, but I digress. I think the grounds set with this movies still hold up, is what I am trying to get at, and a lot of it has aged quite well.

All in all, I can't really think of much to complain about with Dragon Inn. It's badass, beautiful to look at, and has high rewatch value. What more can you ask for out of a martial arts film? The recent restoration in Taiwan and release by Eureka's Masters of Cinema, only looks to further immortalize this deserving classic. That being said, and from what I've heard, King's follow-up film, A Touch of Zen (which I am currently waiting on to see here soon, and shall review), takes everything Dragon Inn does so damn well, and perfects it. I honestly have no idea what to expect then. This film completely blew me away, and I see why fellow Taiwanese filmmaker, Ang Lee, went on to be inspired to make Crouching Tiger, Hidden Dragon. It's magic that everyone surely will want a piece. An absolute classic and one that shouldn't be missed.