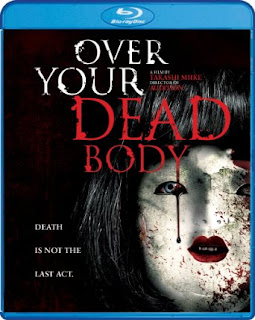 One of the problems of being an international cinephile is that it will sometime take years for a movie to get a legitimate release in the US. If at all. For a director as prolific as Takashi Miike, who has recently been dropping two films a year, it can be somewhat grating to wait. Two years is how long it took for his horror flick Over Your Dead Body to reach the US, thanks to Scream Factory, but it’s here and it’s going to be a cult classic for sure. Atmospheric, haunting, and nightmarish are all very effective words to describe what you’re likely to latch onto in this film and while it may not find a widespread audience here in the US, fans of the director and his work are going to want to jump right in.

When the headlining seasoned actress (Ko Shibasaki) and her lover (Ichikawa Ebizo), the other star, find their relationship crumbling, the horror themed samurai play they are in rehearsals for starts to become a little too real. As things become desperate and tensions rise, the lines between play, reality, and nightmare will start to blur for our lovers…and the final call will be more final than expected.

While it was heavily compared to another Miike horror classic Audition in a lot of its hype, truly Over Your Dead Body is a mixture of some of his previous stuff more than a direct relation to Audition. The structure and concept is more or less in that same vein, as the film starts off in a more dramatic manner with two lovers in the same play who are dealing with relationship trouble before it slowly sinks into insanity, but the style itself is a volatile mixture of samurai film, J-horror, and Audition. While that sounds like a lot and it might seem odd, Miike has always been a master at cross genre manipulation – and his execution is in high order on this film.

Over Your Dead Body does have to heavily rely on onscreen atmosphere and presence to sell its rather low energy concept. The film is shockingly sparse in dialogue. In fact, most of the dialogue that’s presented in the film comes from lines from the samurai horror play that the actors are actively rehearsing for most of the film and thus it makes the parallels between the play and the actual plot fairly easy to decipher even when there is almost no exposition to be found in the writing. However, Miike and company do one thing right and they pull away from the ‘meta’ idea that the film could have easily catered itself towards. This is not a film about play that represents a life that’s shown in a movie. This is much simpler than that. This a story that’s about dying love that just so happens to be shown in two different contexts that weave together. Powered by very subtle, but impactful performances from all actors involved, Over Your Dead Body does a lot to slowly hook the viewer without overstaying its plot weaving welcome…particularly as it starts adding in the supernatural elements.

For the actual horror pieces that Over Your Dead Body brings to the table, it’s a hodge podge of various styles and looks on hand here. To continue with the comparisons, think of the slide into surrealism of Audition, but partner it with the gimmicks and visual flair of J-horror ghost stories. The twist of the ending is fairly obvious (it lacks the truly disturbing nightmarish tone of Audition at this point) and even the J-horror pieces at this point are easily discernible tropes (the wronged ghost, the gory visuals, and the stark contrasting blacks and whites), but Miike always shoots things with a fresh tone and when they are partnered with the tension and atmosphere of the first two-thirds of the film it works better than it should have.

Like most of his films, Over Your Dead Body is a ballsy concept and genre bender that Miike crafts successful thanks to his talents as a director. The visuals are effective, the writing is efficient, and the performances are enigmatic. Due to some of the plotting that blends very subtle present day characterization with classic Japanese horror themed samurai play dialogue, the film can be a hard sell for more casual horror fans in the US. However, if you’re a Miike fan or a fan of the Japanese horror concept then this film still gets a very big recommendation. It’s an odd film, but one that will most certainly find its cult audience in a big way down the road.