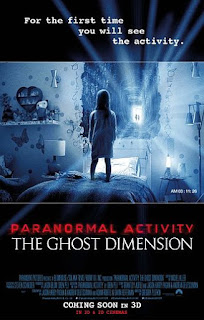 The Paranormal Activity franchise was definitely one of those “hit it while it’s still hot” franchises that exploded onto the scene and would, like most of these kinds of series, go out with a whimper. The quality of each entry varies to a very great degree (hitting a series low with the fourth entry and somewhat redeemed by the oddity of its spin off The Marked Ones) and the weird theatrical release hiccup for this latest entry The Ghost Dimension kept me hesitant going into the film. This hesitation was deemed mostly justified though as The Ghost Dimension tries to keep things fresh for this quickly decaying franchise with some new elements, but it still feels stale as it goes about pounding the formula home for its audience. It simply can’t override the issues that have plagued all of the entries since the beginning and it can’t jump them with quality execution.

For Ryan (Murray) and Emily (Shaw), their new house is a blessing for their family which includes their young daughter Leila (George). When Ryan’s brother Mike (Gill) comes by to stay with them for two weeks during Christmas things are looking nice. That is until the brothers find a weird camera and VHS tapes in the house. A camera that can see things. A camera that seems to hold a key to their good fortune and the odd things happening around their house.

In the hype that was being built for The Ghost Dimension, which incidentally is a dumb title – fans already know that this series is about witches and demons and not fuckin’ ghosts -  they really plugged this idea that audiences would finally get to see the demons and forces that have been the antagonists in most of the series. To be honest, outside of the intriguing spin of plot in The Marked Ones about someone chosen to be a warrior for the demonic forces, this franchise desperately needed a new angle to keep things fresh. Unfortunately, The Ghost Dimension has no intention of deviating from the formula of the franchise despite the new visual gimmick. Instead, these new CGI elements of demons and portals undermines any tension or atmospheric heaviness that could have carried the scares and chills. Seeing more shapes and faces doesn’t add to horror as much as it detracts from the clever tricks that various previous entries used to keep its audience hooked. As if to add to the insult, The Ghost Dimension then uses every cliché in the haunted house and exorcism book to sell its new visuals. For well versed horror fans it’s not only underwhelming, but it seems to spit in the face of what this franchise did well to begin with.

To its benefit, The Ghost Dimension does bring together some neat pieces of plot to tie in the various entries of the franchise together. Not to give too much away, but it dabbles a bit more in the time travel aspect and even starts off with a familiar scene from Paranormal Activity 3 and builds on that. It’s not quite enough to really make this film the finale it was sold as, particularly as the third act seems more intent on giving us crazy visuals than something that ties together plot lines and character arcs. In fact, the ending can be downright confusing considering it has a bit of time travel element to it that really messes with the general mythology.

As a Paranormal Activity entry, it’s not the worse and it works the formula in a way that die-hard fans are going to enjoy on some level. The new angle of seeing the “activity” however takes away from the clever scares and fun execution of previous entries without adding anything of relevance to the plot or scares. If this was the end of the franchise, it would certainly have gone out with a whimper without any of the clever pieces that have made each entry at least somewhat enjoyable to watch. I don’t know if I would put my money on it being the end though as the franchise is primed for a direct to VOD or home video reaping like many of the big franchises of decades past. Take it for what it is, but it’s hard to recommend this to anyone outside of franchise whores and those Paranormal Activity junkies out there.