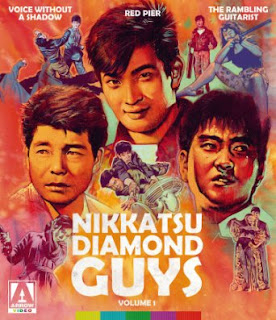 Sometimes there is a beauty in going into a film blind. You truly get to experience how the film unfolds, the surprises of its plotting, and the charm of its gimmicks with little in the way of expectation. As a film fanatic, it doesn’t get to happen very often and ‘being in the know’ for readers, friends, and family tends to negate a lot of the surprises that films have in store. For the three film set Nikkatsu Diamond Guys Vol. 1, I tried to go in as blind as possible. Outside of a little previous knowledge of the films, I was able to keep myself in the dark quite a bit and it led to a lot of surprises in the films of this set. Some of the surprises were awesome (the quality of Red Pier), some were shocking (the toned down feel of Voice Without a Shadow), and in the case of the last film The Rambling Guitarist, a bit disappointing. Granted, The Rambling Guitarist is full of some fun story pieces, charming performances, and a few entertaining moments, but the film is also scattered in its narrative and feels like its missing a few layers. It’s a fun little flick, but hardly to the quality that featured in the previous two films.

Taki (Akira Kobayashi), a wandering guitarist and singer, winds up in a nice little port town while meandering. Quickly enough, he finds himself in a bit of a bar brawl which catches the eye of a local mob boss who offers him a little work while he’s in town. The guitarist is hesitant at first, but decides it can’t hurt to have a little money as long as he doesn't skew his morals. Soon enough he finds himself in the middle of an odd family squabble which attracts a few faces from his past.

At first, The Rambling Guitarist starts off like one of those old school Elvis films. Young, rebellious vagabond finds himself in a spat of trouble as a young woman bats her eyes in his direction. Akira Kobayashi is a spitfire actor in this manner and he’s got a heartfelt arrogance to his character that he encompasses nicely and the small pieces of music fit smoothly into the plot. However, the film does feel slightly generic at this point and despite some of its charms and beautiful cinematography (brought to vibrant life by the Arrow Video Blu Ray) it lacks a lot of punch as it runs through the motions.

That doesn’t stop the film from taking a rather odd turn about halfway through though. Our hero Taki starts doing some mob jobs and the film starts to shift gears towards a more traditional yakuza thriller. This shift of tone and style is punctuated by the arrival of another hitman Joji (who goes by George in the subtitles), played by the ever versatile Jo Shishido, as a charming and dangerous face from Taki’s past. Now there is a handful of big twists that arrive at this point to further push the film into a sort of cops n’ robbers territory that I will not spoil, but the film gets much more interesting and dynamic at this point too. The shift between the two tones is not necessarily a smooth one and there is quite a few holes that are left in the plot and characters that needed to be filled for the film to feel as impactful as it could have. Seeing as the film runs a scant 77 minutes, it could have spent some time really building up character relations to get the punch it needed overall. Still, the move from musically inclined romantic drama to yakuza action thriller is an improvement and the ending features a fun duel that will have viewers snagged.

Of all the three films in the Nikkatsu Diamond Guys Vol. 1 set, The Rambling Guitarist might be the weakest, but it’s still a fairly charming film that takes a lot of surprising twists. It’s not as cohesive and smooth as one would hope, but the film runs on some fun moments and charming performances to slide by as a solid watch. Fans of the Nikkatsu late 50s and 60s era new action films will certainly appreciate what the film has to offer though and it comes highly recommended for those interested in that kind of film.

Written By Matt Reifschneider
Posted by DarkReif at 5:25 AM