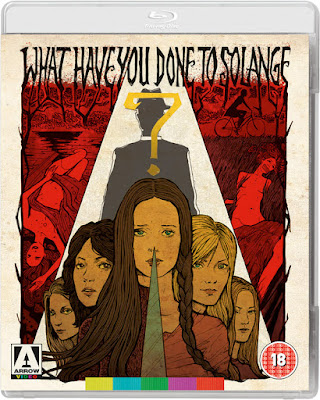 While I am still far from a giallo expert at this point, it has always seemed that a flaw of the genre is a sort of ‘style over substance’ approach. Perhaps a better way to explain that is that giallo is often a ‘style = substance’ kind of thinking. Many of the stories are formulaic murder mysteries and it is the striking directors and shocking gimmicks that carry them. However, that is most certainly not the case for the 1972 giallo gem What Have You Done to Solange?. In the case of this film, recently re-released in a new high definition blu ray edition from Arrow Video, the plot is wholly the focus of the film and everything tends to come second to the narrative. Essentially, the opposite kind of thinking for a lot of giallo films. In a way, it’s refreshing as the film really slathers on a complex and twisty plot instead of using visuals as the key to carrying the film like many others do. While it wasn’t quite what I was expecting, I was most certainly hooked by the film and eagerly went along for the ride.

Elizabeth (Galbo) is having an affair with her professor Enrico (Testi) and when she happens to see glimpses of a murder one afternoon while on a date with her lover, she finds herself as one of the loose ends in a string of murders happening at her school. The police and Enrico are entrenched in finding the black gloved killer and how he is connected to the school, but it’s a deadly secret that may hold the key to finding him…and a mysterious girl named Solange.

Right from the opening sequence that features of a ton of young girls biking together as the opening credits roll, What Have You Done to Solange is already throwing pieces of mystery at the viewer. Just the title itself invokes a kind of enigmatic aura for the film (it’s also worth noting that the character Solange doesn’t even get mentioned until the opening of the third act, which only adds to the mystigue) and the film doesn’t take long to get the ball rolling with its plot. Viewers are introduced to essentially two protagonists, our schoolgirl Elizabeth and her professor/lover Enrico, and the film immediately makes things complicated by having Enrico be a married man...to another one of Elizabeth's professors. Solange doesn’t spend a lot of time with exposition though to set things up, a ton of the detailing arrives in a very natural manner as the narrative plays out, and it focuses instead on keeping things moving at a brisk pace with the story. In fact, the pacing is superbly played out here and it’s a lot of the on screen execution that carries the film. Occasionally, there are plot elements that seem a bit forced for the sake of pacing (Enrico’s wife seems to quickly forgive him his adultery so she can join the hunt for the killer – which takes away some of the initial drama that kept the film in a gray area for its first act), but it moves quickly enough and has enough solid giallo twists that it rarely detracted from the whole experience.

Solange focuses on being far more realistic and less stylized than many of its peers as it goes about telling its story in the classic giallo mold. Solid performances carry the brunt of the emotional aspects and director Dallamano goes about giving the film an almost ‘based on true events’ thriller tone versus the slasher-esque feel that other gialli can slide into. The kills, outside of one sexual aspect, are less gimmicky than I expected, a welcome move for a giallo film that adheres to the more realistic tone, and even the killer of the film is less about a visual presence as much as a plot progression piece for the overall narrative. This could be one factor at why Solange isn’t a title thrown around readily when giallo films are mentioned, but it keeps the film feeling cohesive throughout its almost two hour run time and it sets it aside as a more serious and focused film when compared to many of its peers.

Solid performances, a realistic tone, and a plot focused narrative all make What Have You Done to Solange a striking and unique giallo film that fans are going to what to grace their collection. Even better is that this Arrow Video release is remarkably robust in features. The new transfer (which also brings Ennio Morricone’s impressive score to the forefront) is worthy for collectors and there is a ton of great special features that add to the experience – including a visual essay that is great for newbies like myself. It’s not a perfect film as it’s a little long and some of the plot progressions can be forced, but it comes with a very high recommendation from me for all of the above mentioned features. Not to mention it really grows with repeated viewings. 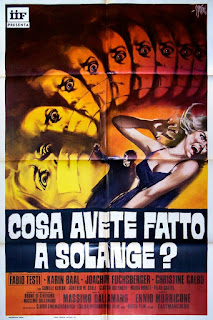 Written By Matt Reifschneider
Posted by DarkReif at 5:29 PM