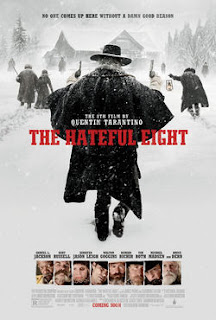 As a cult fan, I love the idea of what Tarantino brings to his films. The guy has created his own niche of borrowed ideas, style, and cinema love for a new generation of film fans from an era of overlooked gems. I love that idea. However, the last handful of films has seen Tarantino generally lose himself in his own influences. While Inglorious Basterds made it work in some brilliant ways, Django Unchained started to crumble a bit as he catered to his own cinema arrogance. His films were getting too long, too wordy, and felt unfocused as he jams in too many concepts, plots, and characters. This is where The Hateful Eight comes along. A more stripped down premise, this cold western would seem like an antidote to Tarantino’s long winded and jumpy film aspects that were becoming cumbersome in his films. A weird blend of spaghetti western and Agatha Christie mystery, The Hateful Eight has massive potential and in its bare bones idea is perhaps the most wounded by Tarantino’s own elements. This film is too long, too wordy, and too jumpy for its own good despite its glorious moments.

Major Marquis Warren (Jackson) needed a ride and it just so happened an old acquiatence John Ruth (Russell) and his bounty Daisy (Leigh) come by in a stage coach. A blizzard is fast approaching and they are in a hurry to get to Minnie’s Haberdashery for some shelter. Picking up the “new sheriff” of Red Rock along the way (Goggins), they discover that Minnie’s Haberdashery is already occupied with some questionable folks…and tensions rise as they begin to suspect each other of evil intentions.

As I like to do, let’s start with some of the brilliant and inspired things that The Hateful Eight has going for it. The film is fuckin’ beautiful. The cinematography is gorgeous, the set design of the Haberdashery is detailed and effective and Tarantino knows how to shoot a film. Despite being a (roughly) three hour film, Tarantino keeps the viewers engaged with diverse shots and inspired visuals. There is a moment where Daisy is playing the guitar as the camera moves around the room focusing in and out on various members of our hateful eight and the director doesn’t edit it down. It’s damn near a perfect moment. This visual style is hinged on some phenomenal performances too. Tarantino has always been able to litter his film with iconic scene stealing personalities and this film is no exception. Samuel L. Jackson, Kurt Russell, and Walton Goggins tend to get most of the meaty moments, but that doesn’t stop Leigh from taking a rather one note insane criminal and pulling the viewer into her performance. The same goes for most of the lesser roles too right down to the bit parts in an extended flashback that features some fun material for throwaway characters. The execution of visuals and performance is superb in this film and I have to give it merit for that.


Unfortunately, these prime elements are resting in a film that has gone too far Tarantino. In the hands of the talented cast and director, this film could have been handled in 2 hours will the same exact impact and emotional tension without dragging on and on. Tarantino has always been known to get his character growth and establishment done in dialogue that never feels like exposition, but this film takes it to a new level. At one point, I actually thought to myself “yes, we get it, these guys are assholes with questionable pasts…let’s move on already.” The script, which unveils itself as a mystery as to who is scheming to save the prisoner, suddenly becomes second focus to just showing us which of the characters is more questionable. We cease to look for clues in the plot or the dialogue and become wrapped up in these cynical asses just trying to out asshole one another and it gets tiresome by the third act.

When the film does start to pick it up with massive amounts of gore and violence in the third act, it feels almost like a relief when compared to the entirety of tension building for the rest of the film. While there is certainly some payoff in this ending, including some very awesome cameos, it never felt like it was worth the massive amount of time the film spends setting up the conclusion. For a film that should feel like the most streamlined of Tarantino’s films (it only has one scene that is out of order from the rest!) it tends to meander too much and it makes it lengthy run time feel like it. There are even a couple of the ‘hateful eight’ characters that could have been cut completely and the film wouldn’t have felt all that different.

There will be, of course, a ton of people that love the hell out of The Hateful Eight. Tarantino fans are sure to eat up the quirky dark humor (the door opening and closing joke was insanely well done) and the film’s endless ‘storytelling’ dialogue, but for this reviewer it felt as though the director/writer had not stripped down the film enough for what it could have been. This is a much simpler movie than it tended to feel like Perhaps with repeated viewings I’ll find that it flows better and that the dialogue doesn’t feel like it’s trying to be so Tarantino-esque. Right now though, it’s hard for me to call this one of his better films despite its attempts at being something a bit less complex than his usual material. It’s good, but far from great.

BONUS RANT: I sincerely dislike the two times that the narrator (voiced by Tarantino himself) pops up in the film. Again, it’s a stylistic choice that doesn’t quite fit in with the film and it’s lacking cohesive appearance seems forced – like he didn’t know how to explain certain pieces of the script either visually or with dialogue so he just randomly inserts some narration.