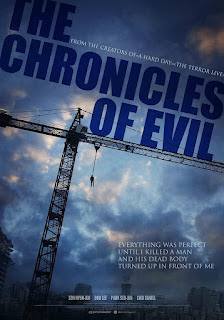 Let's kick off my Korean movie experience of 2016 with one of the biggest letdowns in recent memory, with Chronicles of Evil, which tells the story of a detective squad chief, who is soon to be promoted in his field of work, when suddenly, and I mean suddenly, things come crashing down around him, when he finds himself involved in a murder case. What follows is tons of close-ups, and a bunch of characters you won't care about.


So let's get this out of the way. I did not like this movie. I wanted to, and in fact, last year when the film was on its way to being released in Korea, I posted about it on social media pages quite often. I was really excited to see a new project involving actor Son Hyeon-joo, who had recently at the time impressed my with his acting chops and presence in another thriller, Hide and Seek, which is phenomenal and I would much rather recommend that to anyone over this film, but I digress. This film is one of those thrillers that tries way too hard.

The movie starts off, and within in minutes it's right into the action. Well that's not a bad thing, right? Wrong. It's like "Here's the main guy. He's a good worker. Here's his family. He has a family, audience, and don't forget that. Here's him drinking, as he is quite social. Congrats on the promotion Boss!"... through a series of very short lived, pointless scenes that don't help establish a solid main figure to route for. Now, does he have to be likable? No, but they don't even set him up as an anti-hero. He isn't set up at all. He is getting a promotion, he gets drunk, he gets in a taxi, and suddenly things go south. No, this isn't spoiling anything, as that is where I will end that part of the plot (which we are only minutes in by this point anyway), with only this to add... 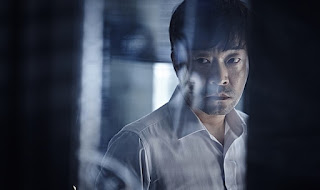 ... so the taxi driver throws down with Son Hyeon-joo, though I won't spoil as to why, even if it is not very smartly handled anyway, and we get our 1st taste of the action in the film, which though it is light in that department, it is still scattered throughout and important enough, so let's dive in. It sucks. It's semi designed decently, but is executed poorly. The camera is flying everywhere, intertwined with a million cuts, and extreme close-ups, never quite being able to tell just exactly what is going on. Also, it's not fluid. It's as if there are very small, but very noticeable jump-cuts in the action. For example, Son is thrown against the taxi, then instead of cutting to him falling down, or a reaction shot, instead it cuts to him kicking the bad guy back to the ground, almost as if the middle bits weren't shot at all. Not sure, but either way, it is pretty awful to sit through.

After this action, I realized this was going to be the entire film, I just had a feeling, and I was right. The main character is thrown into a situation that he desperately needs out of, but the way it is set up is really sudden and not interesting, as previously mentioned, and the character's motivation and actions seem ridiculous to go to the  heights he does to just to keep that promotion in his grasp. As the film goes on, we find out more and more as to the who and the what, but like most things in this film, it's just not interesting. Never once did I care about what was going on, or why it was, and when the twists, and there are uncountable amounts of them, start coming on, I was just like... yep. I should never have to react to a film this way, especially one that tries so hard to be thrilling.

How I felt watching the movie.

The only element of the film I sort of enjoyed, was Daniel Choi, when his character finally shows up, which is also so over exaggerated in how 'big' the reveal is, with its overly potent score, that I found myself laughing out loud. Still, at the end of the day, Daniel does great, but his character isn't that interesting either, which is a shame. Going back to the twists, like I said before, there are so many that by the ending scenes of the movie, you'll be sitting in a stupor, not at the genius, but at the level of disjointed turns it tries to wow you with. The only character I even remotely sympathized with was Ma Dong-seok's, and not because of anything special, but just because he is a man trying to do his job to the best of his abilities. Also, I know brotherhood and loyalty is a big deal in Korea, but man did I get mad in a certain scene in which they just blindly defend the main character after something heinous and obviously his fault happens. The whole time I was shaking my head.

Even though I dogged on part of the score earlier, it was the only thing in the film that almost got it right. It tries to do different things, like the jazzy song during an important flashback sequence, and a couple of the 'louder' moments actually worked in a sense, with one scene coming to mind in particular, which I won't get into. Adding to that, but switching gears, I'll talk on the acting. It was fine. Everyone did what they could with the script. I don't think the faults of the film lie within them, but within its foundations in general. The writing just isn't there. It just goes on, and on, and on, and almost seems as if it will never end, which is another thing, the film isn't even two hours, it's only 97 (I believe) or so minutes, and I desperately began to want it to end pretty early on. For the love of everything movie, just end please!

How I wish I felt watching the movie.

Let's dial it back a bit, as so I don't get stuck in the same loop that resembles this thriller. The movie isn't awful, it's just a big let down. I generally don't go into a movie with expectations, unless it is from a director I really admire, and this was directed by the guy who made Tube over a decade ago, so it wasn't like I had this high belief it would end up a masterpiece. My gut feeling for at least a solid movie is usually on point, but this time that feeling was wrong. Oh so wrong. If you have time to kill, and have for some reason have absolutely nothing to watch at all but this, I'd save give it a go, but if there are any other options out there at all, save for the obvious abysmal garbage of cinema you know you shouldn't be watching anyway, then go with that, whatever it may be.

With the solid performances, a nice cast, and pretty cinematography, I'd want to say absolutely see it, but with the repetitive nature of the story, dull and by the numbers characters, and a pile of twists bigger than what any person in their right mind wants thrown at them, I'm going to have to say give this one a pass, which is a shame, because it could've been so much more. You'll soon be forgetting you ever saw it, unless you took my advice, and avoided it all together, in which case, good job!