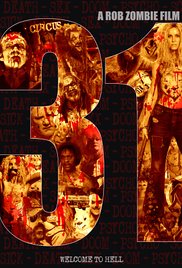 Love him or hate him, Rob Zombie knows how to keep people talking. To say the least, his films are divisive and his style even more so within that same discussion. While I appreciate the love and style that Zombie brings to the table, it’s hard for me to say that I have ever loved anything he has done. His best, the often overlooked The Lords of Salem, was a huge step forward for him as it toned down his manic style, delivered tension, and showed an improvement in his writing – my main issue with his work. Needless to say, I was rather stoked for 31, his latest love letter to grindhouse 70s cinema, because if he could somehow combine the restrained thoughtfulness of The Lords of Salem with the energetic visual and brutal onslaught of his earlier work, it would be a grand success. That does not happen in 31. 31 is a step back. 31 is a film that knows no restraint. 31 will have its fans for its gratuitous gore, violence, sex, and vulgarity, but 31 is also something of a shit show when it comes to being a good film beyond its excessiveness. Take about disappointment.

For Charly (Sheri Moon Zombie) and her co-workers, life on the road as carnival mechanics brings about its fair share of fun and oddities. When they are kidnapped in the middle of a desert and thrown into a maze, however, they will have to battle a slew of insane clowns in a high stakes game of betting for 12 hours.

At this point, Rob Zombie’s style of gritty 70s inspired grindhouse cinema has not risen above a gimmick and 31 might be worse off for it. There is a ton of potential in this film and there are these shining moments of inspired horror that seep through and it almost makes the experience more frustrating as the audience sees what might have been. The concept is fun and many of the secondary performances are worthy of a second look, particularly the main villain Doomhead whom kicks off and ends the movie on high notes with his intensity, insanity, and sheer evil screen presence. However, the film finds itself on shaky ground thanks to many of Rob Zombie’s artistic and style choices. Frame shifts, grainy visuals, and horrendous shaky cam make many of the more intense ‘battles’ of the film damn near unwatchable. What might have been a fun chainsaw fight is castrated by editing and blurry focus and an intense scene where a female clown named Sexhead (face palm) attacks one of the protagonists is undercut by a stobe light that feels like it has violated my rights as a human being. Rob Zombie’s style comes first and foremost in 31, the rest of the film be damned if need be.

The writing here, while pretty poor, is standard Rob Zombie affair. Zombie does vulgar for the sake of vulgar and while I was sincerely disappointed with it, the audience at my screening was eating it up. It’s too bad that 31 often mistakes vulgarity for charm. As the various characters are introduced we see that they are all, essentially, assholes. Rob Zombie likes to use this in his films, but here the assholishness seems particularly uninspired and their penchant for telling terrible vulgar jokes, smoking weed while making fun of Jamaican accents, and just generally being unlikable did nothing for the rest of the movie and its narrative. Even when characters start to step up and become “heroic” as the insanity heightens, no one cares and the audience cheered for their deaths. It’s hard to care when all the characters try to shock and disgust and then try to win the audience over with their conversion to hero. It just didn’t work and when it’s partnered with patchy performances (Sheri Moon Zombie is par for the course in mediocre to terrible performances), 31 doesn’t inspire the connection for the audience to actually give two shits.

This is only one problem with the writing too as the film jams in as many weird moments of imagery as possible. Now I mentioned the villainous Doomhead as one of the better selling points for the film earlier, but he’s not the only clown in town to lay down some hurt. However, the others range from cliché (clowns with chainsaws) to just plain dumb (a Hispanic midget with a love for Nazi imagery). At times the feeling of ‘anything goes’ when it comes to the violence and sex can be its own selling point for audiences, the film did receive an enthusiastic applause when it finished, it just feels as though it was in there for the sake of being there rather than having a rhyme or reason. Why does the midget clown sport an Easter rabbit costume head when he shows up? Why does the film oddly include a dream sequence where two dead clowns show up to tell vulgar jokes? Why is there a scene where Doomhead pops up to tell our protagonists to go outside before awkwardly fading into showing our protagonists outside? Perhaps 31 was gunning for a dream like quality, but that would be giving the film the benefit of the doubt and honestly, 31 feels like Rob Zombie being as much Rob Zombie as possible instead of actually needing a reason for the film’s narrative.

As a result, 31 is easily one of Rob Zombie’s worst films to date. It doesn’t trump Halloween II in just how bad it is, but it’s right down there with it. The film tries to replicate the nightmarish manic energy of his debut House of 1000 Corpses and incorporate more of the 70s grindhouse feel of The Devil’s Rejects, but it fails to succeed at either. There are moments of inspiration in the film and when they show up it’s just a sad reminder of what 31 might have been if Rob Zombie focused down on writing a movie with sense versus hoping that his scattershot style will carry it. This film will find its cult audience like every Rob Zombie movie does and I hope with the proper expectations that fans out there will enjoy it for the big ball of vulgarity that it is, but for me it was simply disappointing on every level.

Written By Matt Reifschneider
Posted by DarkReif at 9:21 AM