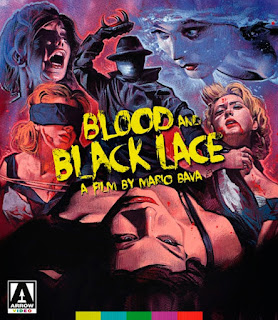 The influence of Mario Bava can be felt in a lot of ways. His style, his approach to visuals, and even his writing has been one of those forces that modern cinema rarely acknowledges, but owes a massive debt to. In an effort to expand my own horizons this year within the realms of cinema, I wanted to leap into the catalog of this Italian cult film director. For starters, I decided to go with the recent Blu Ray release of his early horror mystery flick Blood and Black Lace. It was one hell of a place to start. Littered with all kinds of layers (both visually and in the performances), Blood and Black Lace takes a rather hum drum plot and makes it a riveting. It’s a film that takes a mainstream cinema approach and injects a healthy dose of art into it, fleshing out what might have otherwise been a sparse ‘whodunit’ thriller.

When one of the top models at a fashion show gallery ends up dead at the hands of a masked killer, the rest of the group responds in fear. There is always a lot of suspicious activity afoot and the lives of these models and managers is hardly as snooty as it would seem, but she seems to be connected to all of it. As the police track the clues through the staff, all of them seem intent on saving their own hides…no matter what it takes.

At the basis of Blood and Black Lace, this 60s Italian film is something of a classic Agatha Christie inspired murder mystery thriller. It contains a ton of various and all highly questionable individuals with their own agendas, a continued pile of victims, and twists and turns at every corner as each of the models, their managers, and the police try to untangle a web of lies, truths, and continually complex relationships. Truly though, now that it’s 2016, the plotting of this film isn’t wholly original. It’s the kind of ‘whodunit’ conditions that made the style of storytelling so popular for so many decades. It’s twisty enough, with a few clues scattered about in how people act (particularly when they add in the “disastrous diary” plot element), but when the killer is revealed it’s not like some mind blowing discovery. Even the kills seem rather mundane by today’s standards so you have to understand that in 1964 this was a pretty extreme body count and the conditions of death were probably pretty shocking as the film starts to slide into slasher territory – long before slashers even existed.

What makes Blood and Black Lace so damn appealing though is the touches of Mario Bava. The cast certainly sell their roles in some effectively subtle ways with layered performances, but it’s the Bava effect that carries this film so well. The film is a visual FEAST. All in capital letters. Whether it’s the set designs of the various apartments, the fashion staging area, and the antique shop or the character visuals (the killer in the faceless mask with black leather is just the perfect counter to the models and their focus on beauty and lace), Blood and Black Lace is ridiculously layered. It creates this sense of unease as the film pounds the viewer with stark contrasting and vibrant color schemes – the bright red mannequins just scream symbolism – and then proceeds to light things is sharp shadows and bright lighting. Bava had already crafted his own very intense visual style by 1964, but Blood and Black Lace takes it to another level.

If anything, Blood and Black Lace deserves a lot of credit for laying the ground work for a lot of different horror and thriller genres both with its slasher-esque plotting and its visual prowess of how to create depth, tension, and unease for the audience with just color and lighting schemes. It helps that the casting and direction certainly add a lot of depth to what might have been a rather mundane script (with its own fair share of twists and turns). Blood and Black Lace proves just how a great director can turn something as simplistic as a ‘whodunit’ mystery flick into something that ages like a fine wine and still carries impactful moments 50 years down the line.

As a bonus, this Arrow Video release if fuckin’ packed with insightful material and a stunning transfer of the film that brings to the forefront all of the great executions on display in the film. Tons of interviews, articles, behind the scenes retrospectives, and even a short giallo film inspired by the work of Bava all grace this packed release. Fans of Italian cinema, horror cinema, or cult cinema in general owe it to themselves to immediately add this to their collection.

Written By Matt Reifschneider
Posted by DarkReif at 6:23 AM