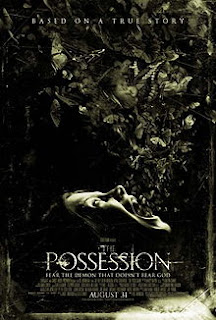 With the general public and initial critics crying 'fail' as loud as they could, my expectations going into "The Possession" were generally low. The trailers seemed decent, but with a generic title and a well treaded horror theme like demonic possession I wasn't exactly gung ho for the film from the start. Fortunately the film did have Sam Raimi's name attached to it as producer and being the fan boy that I am, I had to see it. Now I won't go as far as many critics did to slaughter this film in my analysis nor am I going to praise it like its a film never been seen before or the scariest of the year, but I will say that I was generally (and pleasantly) surprised with "The Possession" as a film that was fairly well executed even if it was obviously castrated to a PG-13 for a larger audience.

Clyde (Morgan) and Stephanie (Sedgwick) have been having a tough time with their two daughters. Their divorce was final just three months prior and despite their best efforts to remain cordial, its obvious the change of familial dynamic has the girls in a tough spot. Clyde has done his best though and he desperately tries to be a good father and even takes them where they want to go...even if its a yard sale where his youngest Emily (Calis) finds a strange wooden box. He never gives two thoughts about the thing, until Em begins acting odd. Not herself. Strange things begin to happen around the house and it all points to her box...or something inside of the box.

"The Possession" is not a film to really bust out and break new ground. While watching the film, its obviously a very formulaic and by the book take on possession and haunting films with nods to "The Exorcist" and "The Amityville Horror" that arrive in spades. At times its blatantly apparent to wear these influences on its sleeve and it makes a good portion of the film...well, boring. The characters go through the same motions we've seen before: discovery, shock, disbelief by the leads, more discovery, belief, and action. It's the same basic plot and script I've seen a dozen times or more. Blah, blah, blah...yada yada yada. And to top it off the film desperately wants to go to the next level with some of its predictable scares, but its PG-13 rating makes sure that it stays a little safe. **Reportedly, the film was cut from R to PG-13 for release so here's to hoping that we get an unrated one on home video soon. Thusly, "The Possession" takes a rather formulaic idea and really just follows a well treaded path that most horror fans will find familiar and somewhat disappointing. Cue cheers from all the folks that called it crap.

There's an ace in the sleeve for "The Possession" though that I wasn't expecting: the execution. If anyone has seen the Danish film "The Substitute" in 2007 from director Ole Bornedal, then you know the guy can mix charm and creepiness like a badass. If you haven't seen that film - do so immediately. He brings that to "The Possession" and he's easily the film's secret weapon I wasn't expecting. From the God's eye view aerial shots to his atmospheric build with editing and killer sound mix, Bornedal brings a lot to the table. His eye for the charm of its characters - that is easily handled by a superb performance from both Morgan and Sedgwick that's barely topped by a fairly impressive Calis that really brings a humanity to its underlying emotional divorce subtext - is matched by a knack for visual prowess. Sometimes the balance gets a bit thrown off (the swing and new boyfriend stand off comes in as unintentionally funny with the girl's make up) and the film can run a little dark in its scary moments (does anyone turn on a damn light at night?), but the combination of charm, atmosphere, and a few successful scary moments like the "Ju-On" like creepiness of the Cat Scan scene does have its strengths in the film.

In all honesty, its hard to really recommend a viewing right now since there are plenty of great horror films floating around including the creepy "V/H/S" and the disturbing "Lovely Molly" both just getting a release, but if you have an afternoon to blow "The Possession" isn't a horrible way to waste it. It's comfortable in its formulaic writing and plot progression, but its execution is a bit stronger than what I was lead to believe and it made for a rather surprising viewing experience. That being said, I'm definitely hoping for an unrated home release to purchase as I felt this one felt a little contained. Here's to hoping it happens.

BONUS PRAISE: When I saw that singer/rapper Matisyahu was in the film, I groaned. Seriously? Turns out, he handled it quite well and had some great humor to break up the tension of the film in the last act. Believe it or not, I would have liked to see him in it more. Who knew?