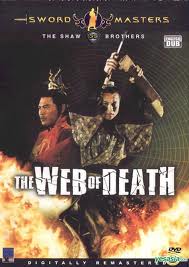 Director Chor Yuen has always had a knack for the epic. Not necessarily for 'good' films, but he can definitely work the epic like it was a fairly easy thing to do. That's just how "The Web Of Death" works. It's often a silly film with its fantasy like elements and ridiculous concept, but Chor Yuen works its characters in some strong ways to really build its complex script up.

Fei (Yueh Hua), a senior student of Mount Wudang, has been sent to unravel a rumor. The rumor has it that the Five Venoms clan is going to unleash their ultimate weapon, the Five Venoms Spider, at the upcoming fighting festival. What he does stumble into is a plot by one of the Five Venoms leaders to overthrow his comrades, steal the spider, and take over the world! Now he must rely on newly forged romantic interest (Ching Li) to make sure that the world doesn't come under tyrannical rule.

You read that correctly. An evil clan ruler is going to steal a magical spider and conquer the world! If you think that sounds ridiculous, then you are more than certainly going to shit yourself when you see how this Shaw Brothers film plays out. Chor Yuen tends to lend himself towards a more fantasy focused style of culturally influenced films and "The Web Of Death" embraces that. The costumes are over the top, the sets are even more over the top (including an acid lake in the middle of the venom's compound), and the way that the spider is used can result in some hilarious moments. I mean, its a tarantula that's carried in a lantern, glows, roars like Godzilla, and spews venomous multi-colored shimmering webbing. If you can't handle the fantasy elements, which there are plenty of them and they are ridiculous, then skip this film.

Beyond that its often too-silly-for-it's-own-good fantasy elements, "The Web Of Death" is actually a fairly strong martial arts film with its frame. The acting can be hit or miss as is the comedy, but the script is pretty damn strong. It's fun at its core particularly as our two leads (Hua and Li) become more entwined in horrible circumstances with betrayals and half truths. The rather complex way it unfolds really does keep you on the edge of your seat though and it does have a great story to build it all on.

The biggest issue with "The Web Of Death" though is it's inability to navigate the two styles of film. The fantasy elements hinder the actual action and fighting of the film and the seriousness of its complex story doesn't do its fun ridiculousness any favors. Even though I had a blast watching it, the film itself is one of the weaker ones from Chor Yuen. It is fun flick, but one that doesn't necessarily work like it could have.

Feel like you need to see "The Web Of Death" to believe it? Purchase it at the links below. I highly suggest the Blu Ray to really make the most out of the visuals of the film!
Posted by DarkReif
Email ThisBlogThis!Share to TwitterShare to FacebookShare to Pinterest
Labels: Fantasy, Martial Arts, Well Go USA