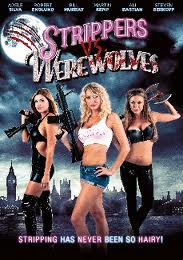 To be honest, its hard to say my expectations were all that high for a film called "Strippers Vs Werewolves." I'm not sure what horror comedies have with strippers as a focal point as of lately, but its a theme that's running rampant. So here we have "Strippers Vs Werewolves" in all of its goofy 80s inspired oddness straight across from the big pond. The film itself was surprisingly effective in its humorous tones, but ultimately succumbs to its low budget and often awkward characters.

When Justice accidentally stabs a werewolf in the eye with her silver pen, she barely realizes the consequences of her actions. As it turns out, said paying customer at the strip club she works at, happened to be part of a werewolf pack and they are pissed off about their missing friend. Will Justice be able to rally her fellow dancers to fend off the rabid wolves or will they all die fangs first?

The concept of "Strippers Vs Werewolves" is about as simple as its title would indicate. We have a problem: our heroine kills herself a werewolf. And we have a consequence: werewolves get pissed and decide to raid the club after following a few clues. It's a rather simple concept that the film makers make a little more complicated than it needs to be by throwing in lots of sub plots that essentially add little to the premise. We get all kinds of rather mundane by the book character development for the secondary characters and most of its comes off as rather ineffective including a rather wasted cameo by Robert Englund and a romantic subplot between one of the strippers and a werewolf that culminates in...well, nothing by the third act.

The film does succeed on a few points. Firstly, its basically what you would expect from a film with this title and that kind of cover. It's silly, low budget, and ultimately the kind of exploitation film you would come to expect in this day in age. It really doesn't pull any punches to sway itself away from what it is and I appreciate that kind of honesty. Secondly, the film actually has some pretty funny moments. It plays on more of a dry slapstick kind of humor (very British) and it works at times. Perhaps I'm an odd duck, but seeing a werewolf get blasted in the crotch with a shotgun to slowly back out of a hole in the door hit my funny bone. Had the film had a little more of a budget to really embrace its special effects, the humor could have been pushed to the next level. As is, I have to admit there were a few moments that had me laughing out loud.

In the end the film makers tried desperately to make "Strippers Vs Werewolves" a fun film. It's got some cleverness to its 80s vibes (lots of screen wipes, comic book imagery, and a great silly soundtrack) and its humor works in moments, but it does run rather awkward in its story telling narrative and with its character development. It's a film that works on a gimmick, but don't expect much more than that as it fails to inspire beyond its gimmick. Then again, if you love strippers and you love horror movies - then this film is going to sit right at home with you!

That being said, if this gimmick is right up your ally - you need to order "Strippers Vs Werewolves" at the following links! On DVD and Blu-Ray September 25th, 2012!!