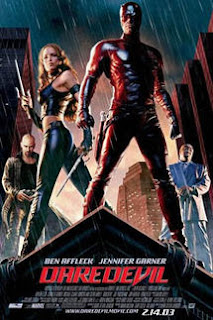 After the mostly surprising success of "Spider-Man", Fox decided to not fuck around with the rights for other Marvel characters and pumped some serious money into "Daredevil" hoping to kick start another franchise. Garnering a slew of popular actors at the time and giving it to a seasoned director (and by seasoned, I mean a guy who gave us comedies like the "Grumpy Old Men" films and the horrendous "Jack Frost"), Fox piled on talent and money into "Daredevil." And that being said there are certainly some things to enjoy about The Man Without Fear and his plight in Hell's Kitchen, but many script issues and some goofy choices in execution make this one of Marvel's worst film versions.

After a horrible accident leaves him blind as a child and the mob kills his father, Matt Murdock (Affleck) vows to uphold justice by any means necessary. He becomes a lawyer by day and uses his increased senses to become a masked crusader by night known as Daredevil. As his plight continues, he crosses paths with a mysterious Kingpin of crime (Duncan) and their battle will cascade down as he tries to save Elektra (Garner) from hitmen like Bullseye (Farrell) and bring an end to the organized crime that has plagued his city for too long.

Even though this version is far superior, it's still a rather muddled affair that fails to balance its darker tones and comic book visuals. It's a film that generally misses on most of the things it could have used to kick it to the next level - and Johnson really has trouble getting the action to work either. So despite being "better", "Daredevil" is still a mess.

A lot of it starts with its script as it has to pack in so much to get in the origin story, characters, and main plot to fit into its two hours. There are some great artistic choices made in the film and things hinted at with its character work, including a great subtext of Murdock's struggle with his religious beliefs, but even those are required to take a back seat as it pummels the run time with far too much plot and character development. The plot structure is a fairly classic one for a comic book film, it just throws too much in there to really complete the narrative like it needed to.

But that should be okay, right? Just because "Daredevil" has trouble with really unwrapping a cohesive story doesn't mean it isn't a fun and entertaining film. Well, in this particular case, it does. With its shaky foundations in writing and plot work, Johnson struggles to handle what is happening on screen. The visuals of the film are honestly quite goofy and they really embrace this cartoonish feel to it. This ideology may have worked for "Spider-Man" but it doesn't work here. Affleck desperately clings onto his character, but he isn't give much more than ridiculous hairstyles to chew into, and the secondary cast overacts everything they do - this is one particularly punched at Farrell who's fun, but really tongue in cheek.

Then to match it's over the top performances Johnson (and the script) really push the action to outrageous levels that simply don't work. Initially, our first view of Affleck as Daredevil is fucking awesome. The darkly brutal fist fight and stunt work in the bar is high octane and really embraces what Daredevil was as a justice giver. Then after that, Johnson focuses on making the action a visual feast rather than something more than that. It's jacked with too much CGI and often loses a lot of its flow. The fight between Daredevil, Elektra, and Bullseye has horrible pacing and ends with a John Woo inspired church battle that occurs partially on massive CGI organ pipes?!? And the film just can't survive its own comic bookish style at this point.

There are a few highlights in the film, the before mentioned first action sequence and Michael Clarke Duncan who was a very inspired casting choice for Kingpin, but "Daredevil" just comes off as a rather muddied attempt at blending serious ideas, dark tones of psyche, and comic book fun action. Although Johnson would actually outdo himself in shitty comic book films with the atrocity that is "Ghost Rider", "Daredevil" gives it a run for its money as one of the weakest Marvel films.