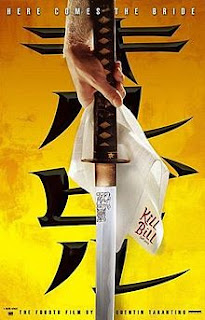 *Note: "Kill Bill" is actually separated into two releases, "Vol. 1" and "Vol. 2" respectively. This review is for both releases, as it was meant to be one film initially and is best viewed back to back as one film.

Quentin Tarantino has always been an anomaly to the system. Essentially, the man has made one helluva career by putting out Grindhouse/genre films and for whatever reason...both critics and the mainstream have bought into it. Granted I would argue that a majority of Tarantino fans really don't understand his films or why they make cult fans like the Blood Brothers rejoice in their genre glory, but they are what they are and as long as he keeps making them I'm okay with that. To get to the point though, Tarantino has always worn his influences right up front on his sleeve. Whether its the gritty 70s crime capers, blaxploitation films, or Asian kung fu cinema he puts it out there. And the "Kill Bill" series is about as obvious as it gets when it comes to collecting styles and putting it out there...sometimes to a fault.

After being left for dead by her former group of assassins during the middle of her wedding, The Bride (Thurman) sits in a coma for four years. Upon waking, she learns of the slaughter of her wedding and pines for the loss of her unborn daughter. She then begins a quest of revenge upon her former team and their leader Bill. First she must travel to Japan and seek out an illustrious sword maker before advancing on her first two targets...

Before I really get into the different elements of "Kill Bill", I have to say that I love this film far more than I actually believe its a good film. As a whole, the two volumes of "Kill Bill" are a dedicated homage to revenge films like no other. In that sense, despite its total of 4 hours of run time, I love them. It perfectly homages the classics incorporating different styles that all of us cult cinephiles could revel in and he does it with enough artistic merit that it still comes off as fresh. In this ideology, its hard for me not to love "Kill Bill."

Now that I've stated how much I love these fucking movies, it has to be said that I easily think they are Tarantino's weakest entries. Where films like "Resevoir Dogs" or "Jackie Brown" limited their influences to a few classic genres and really highlighted their bright moments, "Kill Bill" can be a cluster fuck of different styles and influences all mashed into one. Sometimes its rather choppy in how it jumps from one to another (the film noir sequence at the beginning of "Vol. 2" with The Bride talking to the camera while driving for example) even if for the most part the film ably navigates the tough style. At times its almost as if the film flows on a whimsy jumping from Tarantino patented monologues that seem irrelevant (but aren't) to brutal action sequences with so much blood, courtesy of KNB Effects, it becomes hilariously violent. Unfortunately, the wide variety of styles is somewhat mashed together.

It does certainly help when Tarantino, with all of his stellar camera work and strong writing, assembles this kind of cast. Just look at the 'notable cast' list at the beginning of this review. It's fucking ridiculous how much talent he throws into "Kill Bill." Whether its a regular like Uma Thurman (who shows a wide variety of skills here - from physical work to strong emotion) or cult favorites like Michael Madsen and Sid Haig, this film is packed with stellar performances. I have to say though, David Carradine's lovable bastard in Bill is so memorable that he steals the show every time. It's a killer characters, no pun intended, and its a killer performance.

Perhaps though, the biggest thing about "Kill Bill" that must be mentioned is its the ultimate love letter to Asian cinema from the 60s/70s. And Tarantino has no issues with that, which is obvious when the film starts off with the classic Shaw Brothers logo with its distinctive music and all. He then incorporates every element of a classic samurai revenge film (a cameo by Sonny Chiba helps) and a good dose of classic kung fu into the film. Hand to hand combat. Dueling sword battles. Revenge, betrayal. Classic Asian cinema right there. Hell, he even throws in the classic kung fu character Pai Mei into the film (played by Shaw Bros regular Gordon Liu). This dedication to a rather underrated and overlooked genre makes "Kill Bill" instantly unique.

The film does have a bit too much going on in it, it's 4 hours long, and often enough one feels like it could have been simplified quite a bit (including cutting a lot of Lucy Lui's back story for example). These issues are fairly irrelevant in the end though as its a perfect love letter to the revenge film and cult film fans will eat it up voraciously. It has brilliant actors, a brilliant director, and a very deep and thoughtful script that has far more to it then samurai swords and one eyed assassins. "Kill Bill" might be ultimately flawed, but its a fantastic film that will remain one of my favorites of all time.