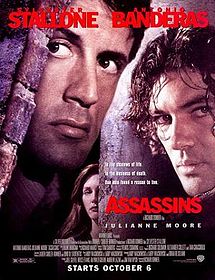 Don't you just hate it when you compile a massive amount of talent and positive pieces to watch it all fall apart in some sort of weird missed opportunity. This is how "Assassins" goes about things. A script originally drafted by the Wachowski siblings, directed by the legendary action man Richard Donner, and starring both Sly Stallone and Antonio Banderas. How could this go so completely and utterly wrong? Yet it does and "Assassins" might be one of the biggest disappointments I've had in my action film watching career.

Robert Rath (Stallone) has been looking to get out of his hit man life style for quite some time, but a record like his can be quite tough to shake. His mysterious contractor seems to keep pushing some new jobs on him and when another assassin (Banderas) shows up to steal his contract, Rath begins to suspect there is more to this game then he knows about. With one last job on the line, he decides to turn the wheels and get himself out.

Underneath it all, "Assassins" is a decent film. It has a solid relatable character in its hero Rath and the script itself has some great solid moments. The chemistry between Banderas and Sly is fun and energetic and it has a couple of stellar action sequences - including a car chase with the two clashing assassins in the same car. There are a lot of great pieces to take from "Assassins" and the film does come off as rather un-offensive as an action film.

Which just happens to be the damn problem. Nothing really flows in the film and many of Donner's choices are uninspired. The film is choppy in its execution, sluggish in pacing, and has far too many underdeveloped tones to its script and on screen execution. The romantic subplot between Moore and Stallone is handedly forced while Moore herself has little depth or connectivity for the audience. Even Banderas seems like a bit of caricature. The action can be hit or miss and the finale is a massive let down as it throws in a few twists that seemed more forced than shocking. "Assassins" just fails to use its elements properly.

Since its release, Donner has publicly "apologized" for its misgivings saying he should have punched up the violence, switched Banderas and Stallone in their roles, and generally make a more competent film. I agree with him on all accounts. "Assassins" is simply an uninspired action film that rarely utilizes its premise or talent to what would have been needed for it to succeed. With Sly and company doing much better films in the 90s, I highly suggest taking a look at those instead.

Written By Matt Reifschneider
Feel like "Assassins" might surprise you more than it did me? I won't stop you from clicking the links below and purchasing a copy.
Posted by DarkReif
Email ThisBlogThis!Share to TwitterShare to FacebookShare to Pinterest
Labels: Action / Adventure