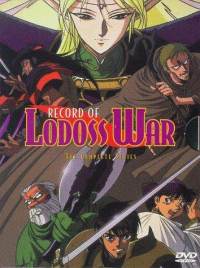 Hello all ! Its time for another trip to the past. The years were late 1990 early 1991 Nirvana had released "Nevermind" kickstarting the grunge movement, "Robin Hood: Prince of Thieves" was blowing up the U.S. box offices. Michael Jackson was still not "Black or White" and a pound of bacon was only $1.95. Those were the days. Around this time in Japan another sensation was hitting the shelves on VHS. "Record of Lodoss War!", based on a series of  fantasy novels written by Ryo Mizuno. Set in an RPG kind of world, "Record of Lodoss War" was building up steam within the anime world. Over here in the states wee little Johnny was never exposed to such things. My only exposure was "Voltron" and "Transformers." Fast forward to 2002 were I found myself working at Suncoast video and alas, I was finally introduced to the anime world. A coworker had asked me to watch anime with him and the title was.... you guessed it... "Record of Lodoss War." I gracefully declined his offer. Now here we are in 2012, a solid 10 yrs later, and I have finally sat down to watch this series. Buckle up grab some nachos and read this review. 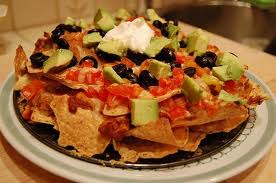 The story: This is an epic adventure story. Much like "Dungeons & Dragons", "Lord of the Rings" and pretty much any recent RPG adventure game. You have your elves, dwarves, wizards, witches, and warlocks along with loads and loads of magic . It also has Dragonsssss! The series centers around the main hero Parn, since this is his adventure afterall. Parn sets out to find out why his father (a knight) was dishonored. Accompanying Parn on his adventure are: Etoh- the priest/healer and childhood friend of Parn, Deedlit- a high elf and love interest of Parn, Ghim - a dwarf warrior whom has his own personal reasons for coming along, Slayn - a wizard in training, and finally a thief named Woodchuck. They all set out to try and take down the Gray Witch. Along the way they meet allies and foes aplenty, ranging from humans to dark elves to demon beasts oh and DRAGONSSSSSSS.

I couldn't help but notice right away how similar this series felt to "Lord of the Rings."
From the fellowship to the quest and the dwarf's, it is oh so similar. With that said, after seeing the series it really is not like those films or books at all. If you like LOTR or D&D, this is a fun adventure. I thought the writers did a good job with character development and giving everyone their time while remaining with the story line. There were no wasted episodes, which, after reviewing several older series, I am starting to think it is more newer anime that uses filler episodes. We shall see. 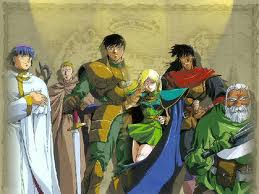 The art- The animation used in this series certainly dates itself, but it's still enjoyable to watch. The dragons do not flap their wings, they kind of scoot across the sky or just hover. Several times I noticed there were no mouth movements when characters talked. Other than that it was still a very colorful series with lots of visual effects such as bright seizure inducing colors during magic battles. I feel the characters were well drawn and animated, especially druing the battle scenes. The backgrounds and landscapes were vibrant and as much a part of the series and the characters. Overall it looks like an animated series from it's era, however it still stands the test of time. 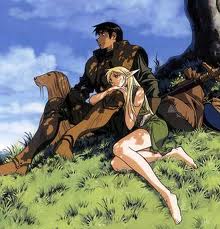 Music- The series is filled with subtle back ground music, nothing over the top or in your face. The opening song was performed by Sherry and was very enjoyable. I feel like the music went with the series, there was nothing distracting in my opinion.

Voice acting- I thought all the voices were great. I am not sure how many of these actors are still around but I really thought they worked well, one and all. I really liked the voice of Pirotess, the female dark elf played by Meg Frances. Even though she was on the wrong side of the war she was my favorite character.

Overall- I loved the story, liked the art work, enjoyed the music and the voice acting was spot on. If you are into fantasy anime this is a must see. It has taken me 10 yrs to finally see this series and what a shame for me because I really missed out.Now if someone says to me Hey Johnny if you could only take one anime title on a deserted island which would it be. I will have to say "Record of Lodoss War". It  really takes one back to better days, when times were more simple. Also I can only recall one boob shot and it was a necessary scene. Other than that, I can't recall any fan service type stuff, only good story and good times. I will make one suggestion, do not be like me and put this off, it is a great watch. I know that you the readers have probably been waiting for this so here it is... DRAGONSSSSSS!! Enjoy! 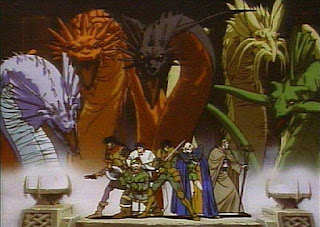 Til next time. Keep watching anime!!

Like what you see in the review? Pick up "Record Of Lodoss War" and some other choice cuts by John at the links below!!