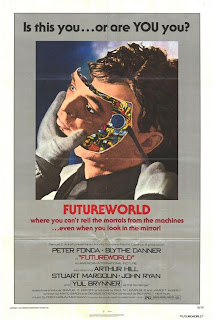 "Futurworld" is a sequel that's been getting the shaft since its release in 1976. After it's initial rental VHS release from Warner Brothers in the early 80s, it was later regulated to a crummy lower quality SLP tape from budget label Goodtimes Home Video and most recently a MOD (made-on-demand) DVD-R from MGM. Seriously, this sequel wasn't even good enough to warrant an official silver pressed disc only to become a member of DVD-R hell!? Well after all these years of studios trying to bury this sequel to the wonderful sci fi classic "Westworld" , it's due time to blow the dust off this now rarely seen film and see if it was really worth all the bad rep shoveled onto it. 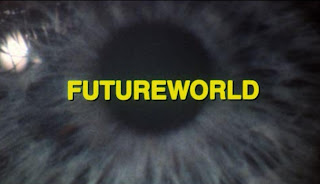 Taking place a few years after the events of "Westworld", the corporation behind the futuristic vacation resort where people could relive history with human-like robots reopens but not all are happy. Due to bad PR caused their robots malfunctioning and killing all the guests, the company invites two journalists to the new resort in order to give glowing reviews to attract new vacationers. The shady corporation seems to have hidden agendas hidden up their sleeves and our journalists know too well and do their damn best to foil their plans.
What makes this sequel work is that it goes against expectations. This is not a suspense thriller where killer robots attack our guests. Instead it's a political cover-up with an espionage plot that, without giving too much away, includes replicating humans. This plot gives the audiences something fresh yet at the same time I believe audiences were alienated by it. They wanted to see killer robots, most notably in the form of Yul Brenner, chasing and killing  people and that is not the dish they are served.
Though the plot intrigued me, what almost kills the film is an actor I have no respect for. His name... Peter Fonda. He is absolutely wretched as our lead and is miscast beyond belief. Him, along with his love interest Blythe Danner, show absolutely zero chemistry and together they are a disaster on screen. To top it off filmmakers felt obligated to give the audience Yul Brenner since he was such a memorable and pivotal part of the original. The problem is that he makes only a small, awkward appearance in an ultra cheesy dream sequence of our heroin that is guaranteed to induce laughter. Seriously why is she having a wet dream about a killer robot dressed as a cowboy? I'll tell you why... to give the audience a quick glimpse at what they were expecting.
"Futureworld" is a flawed film, but not nearly as bad as reputation would have it. If it weren't for the miscasting and unlikeable leads (not to mention the cheesy, length padding dream sequence ) then "Futureworld" might have gone down as a minor 70s science fiction classic. Despite the departure of original writer Michael Crichton, the filmmakers were still able to craft a smart film that goes against expectations, which for me is always a plus. "Futureworld" is definitely worth checking out for fans of "Westworld" and is deserving of far more than a crummy MOD DVD-R release.