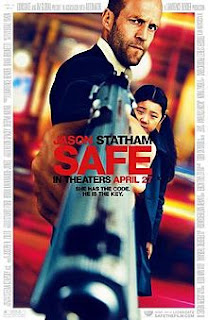 It's no secret that we love us some Jason Statham around here at Blood Brothers and the sheer amount of awesome movies that this action star has been in for the last decade is stunning. You would think that eventually he would have a misstep...but no. He just keeps pumping out awesome movie after awesome movie like its nothing. That includes "Safe." Despite a rather brief theatrical run, I never had doubts. Not at all and its nice to know that in the end you can always count on Mr. Statham to deliver energetic massive amounts of ass kicking on a whim when you need. Which he does here...in spades even if the film can be hit or miss with its execution.

Luke Wright (Statham) was in wrong with the Russian mob after blowing a fight. They murdered his wife and only spared him if he were to become a drifter never to get close to anyone without them being slaughtered. And that's when he meets Mei (Chan), a young girl with amazing skills with numbers, who has a slew of Triads and Russian mobsters after her. Now is Luke's chance to redeem himself by saving the girl and figuring out why these gangs want the number she has in her head.

A friend of mine once commented on how Statham is the new Charles Bronson. After seeing "Safe", I'm damned near inclined to agree with that statement (even without "The Mechanic" connection). This film isn't one to focus on massive action set pieces with ridiculous stunts and outrageous one liners. It has some of those things, but its details instead of foundations. This is a film that takes a "normal" man, throws him into some dire situations, and let's the character be a hero even if he doesn't want to be. Which is damn near the same concept of most Bronson films from the 70s and 80s. And for the most part, it works with "Safe". Although the film tends to over-complicate itself with corrupt police officer sub plots that aren't quite as deep as they would seem, the 70s crime/action vibe matched with the rather surprisingly artistic eye of director Yakin and the screen presence of Statham is one that beats its way into your heart.

The plot of the film gets a bit muddled with too many characters and an unrelenting need to twist the story too much, but "Safe" has a killer pacing and strong sense of badass action to go with it. The chemistry of the film just works. Whether its the fun and awkward relationship between Luke and Mei, the brutally fierce action, or Yakin's ability to bring a little heart and soul to rather by the book characters (particular nod goes to the scene where Luke finds his wife with the mobsters dictating the rules of his exile and how Yakin really brings out a burdensome amount of tension by slowing zooming in on Statham's face) - "Safe" rocks the chemistry. The action is particularly intense with just how many people get capped in the film (the body count has to be huge here) and Yakin does his best to make it relevant. A nice touch for those who watch a lot of these kind of films, like myself.

"Safe" does tend to run muddled like I said. Too many villains hinders all of them from reaching true evil heights, including a "hit man" who shows up at the end for the finale which could have been epic but wasn't, and the film wants to often over explain itself. Sometimes, its okay not to want to give a reason for EVERYTHING, but "Safe" often thinks it has to. A lot of the issues in this film arise from its need to over complicate matters when, in the end, all it needed was its chemistry to really work.

With this review coming to a close, I will say that I enjoyed the shit out of "Safe" despite its obvious foundational flaws. Statham fans rejoice because he's done it again. This time with a little help from a surprisingly effective director and a film that allows him to do what he does best. I give this high recommendation for action fans, even if those outside of the genre may see less in it.

Think you would enjoy "Safe"? Then you can purchase the film at the following links to help support Blood Brothers in their endeavors! Take a moment and click!