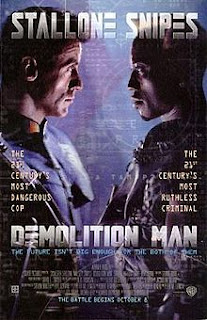 When I was on vacation, I decided it was high time I revisited Sylvester Stallone's 90s action film catalog. This means I had to start with one of my favorite Sly films of all time. The science fiction, action, comedy film "Demolition Man." Although there is still plenty of debate to the worth of this film, it holds up to this day with how finally tuned (and ridiculously silly) the film rides that line between the genres. It definitely knows what it is and it simply runs with the concept as fast and hard as it can. Something to be admired for a film that essentially mocks itself and other action films the entire time.

In 1996, the world of the near future (snicker) has become somewhat of a hell hole. A rogue cop John Spartan (Stallone) is bound determined to finally take down domestic terrorist Simon Phoenix (Snipes) in a final showdown in L.A. The bastard tricks him though and both are thrown in a new type of prison, one where the inmates are cryogenically frozen until their parole time. That brings us to the current year of 2032 (snicker) and now the world is completely at peace...until Phoenix escapes. Now the law enforcement have only one choice...thaw out The Demolition Man and use his talents of violence and ass kicking to bring down the vicious villain once and for all.

I'm sure there are skeptics to the quality of "Demolition Man". If you read that synopsis above and see that its a mixture of science fiction, action, and comedy then I actually would agree with you. On paper, this early 90s romp into the future looks like it shouldn't work at all. The trick to the film is that it never takes itself overly serious and it simply has fun with its concept. Remember that? Fun at the movies? Well "Demolition Man" redefines fun in how it blends the genres and runs with it making it easily one of the most entertaining movies of the period and of Sly's career.

It has to initially stated that one of the reasons that "Demolition Man" is such a blast (pun intended) is its ridiculously over the top set up. It's your cliche action hero and goofy 90s villain, but its the weird, an oddly satirical, vision of the future that works. A place where violence simply doesn't exist, anything bad for you is outlawed including sex, red meat, and swearing, and you wipe your ass with sea shells. It's taking this humorous world of silly dialogue and subdued emotions and throwing two of the most outrageously violent and abrasive men into it. It's comedy/action gold if you could ever think of it! Not only that, but the cast is more than up to out act one another in cheesy one liners and strong chemistry. Sly is ably his 90s self, ready to spout horrible one liners and generally kick everyone's ass at the drop of a hat all in heroic fashion and his supporting cast really sets him up for great moments - whether its the air head Sandra Bullock or the homeless Denis Leary. It just works.

Perhaps though the best part of "Demolition Man" outside of its fun writing and strong pacing, is Wesley Snipes. Besides his role as Blade, this is by far the greatest role and performance he has pulled off on celluloid. Not because he's a great actor. Not because his character has a strong arc of growth. Because Simon Phoenix is Wesley Snipes done in exponential folds. He spouts off puns and one liners non stop, kills and injures endless amounts of people, and generally does really odd things. The sequence where Snipes is at the computer phone booth is cinematic genius for the genre.

Although "Demolition Man" is certainly a silly film whose political/society subtext is sometimes a missed opportunity, its hard not to love the shit out of this film for what it is. The comedy works in spades with great chemistry between its actors, the action is intense with great set ups and locations, and the pacing is perfectly set to use its cliche elements to perfection. On a depth level this 90s Sly vehicle might come up a bit shallow, but its a brilliant film in the entertainment sector and one that handedly works as one of the best of the genre not just of the era.