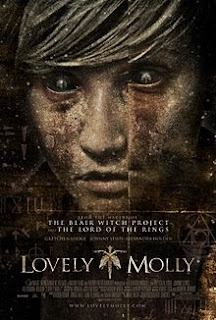 After watching hundreds upon hundreds of horror films, my resistance to fear and scare tactics has been built up like a massive callous on my psyche. Very little truly 'scares' me any more and unless the film decides to use spiders as its villainous evil doer, I find that a horror film's shenanigans rarely effect me. Yet, there are certainly films that unnerve me. Crawl under my skin. Genuinely disturb me. It's rare, but it happens and "Lovely Molly" just happens to be one of those films. Almost the bastardization cross between art and terror, "Lovely Molly" is a wickedly creepy and disorienting film that plays with the head and despite some cliche moments comes off as a fantastically executed horror ride that is certain to earn itself some significant praise from genre fans.

Molly (Lodge) and Tim (Lewis) are a newly wed couple who have decided to head back to her hometown and occupy her child hood home that was left to them when her father passed years earlier. She's a recovering drug addict and its been a tough road to recovery. With Tim constantly gone for long stretches, as is the life of a truck driver, Molly begins to see and hear things in the house. Things from her childhood long forgotten...things that might just have malevolent intent on her well being.

Director and writer Eduardo Sanchez has become the king of low budget subtle horror. His career peaked a little early with "The Blair Witch Project" and has somewhat been hindered by its anomaly success. That hasn't stopped him from released some decent films ("Seventh Moon" was a surprise), but its "Lovely Molly" that just might be his best film to date. The guy guts realism in horror like it's nothing and this film really caters on that feeling of subtle detail and realistic auras. It just oozes dread and atmosphere out of every second. The killer sound mix and score only add to its intensity and the stunningly disturbing performance of leading lady Lodge hits into the soul with fascinating effectiveness. The execution on screen is something to be admired for low budget horror film making and his knack for building terror out of (essentially) nothing is a force to be reckoned with in the film.

Plot wise, "Lovely Molly" isn't all that original. It's one of those films that rides the line between psychological horror and true supernatural scares and often enough it treads on paths well worn from previous films. It loves to build the tension to a breaking point and earn its scares through creepiness and clever writing rather than cheap boo frights. Hell, just having a room in your house decorated with black and white pictures of horses was enough to give me the heebie jeebies (the horses is a thread that runs through the film in subtle ways including sounds and visuals that comes back in the finale for a nice creepy jab at the audience). At times the writing was almost too subtle for its own good sacrificing something solid enough to bite on for artistic merit - including an odd subplot with a neighbor's daughter that feels underdeveloped, but the film does create that dreadful atmosphere with vigor and success.

"Lovely Molly" isn't a perfect film by any means as it occasionally forces its own hand in some situations (when she has a talk with her boss for example) and tends to be too subtle, but Sanchez's direction and the powerful atmosphere he builds with the help of some stunning acting is hard to dismiss and it overrides many of the minor issues the film hits. This is a definite surprise for the year and one that any horror fan must see to believe. It's creepy beyond all measure and its one that is certain to disturb many. It has issues, but its still one of the best of the year.