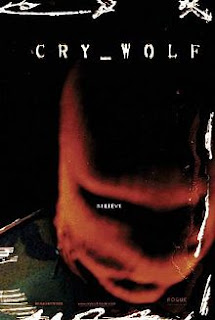 As if the revival slasher genre hadn't already grown insanely stale by this time, companies kept trying to reignite the failing trend by creating gimmicks and "twists" to the tried and true formula. Unfortunately it rarely works with the watered down versions that kept pumping out well into the 00s and "Cry Wolf" falls prey to its own schemes. That being said there is some cleverness to its by the basics "whodunnit" tale of murder on a private high school campus with how it goes about creating its villain, but it still ends up lumped with its peers in being too melodramatic and weak in the elements that make slashers great.

Owen (Morris) has had his fair share of trouble at previous high schools and with some string pulling his father gets him admitted to Westlake Preparatory Academy. This look up here when he meets Dodger (Booth) and brilliant and somewhat sneaky girl with the same ambitions as him and her friends who quickly form a tight bond. When a woman is killed outside of the school in the woods though, the group of friends decides to play a "urban legend" prank on the school. They create this slasher killer who repeatedly kills in the same manner at different schools to get people freaked. A problem then arises when mysterious IMs appear and threats become a reality as his friends disappear. Is the "Wolf" real or are one of the sheep cleverly disguised?

I actually really enjoy the idea behind this film. A fictionalized killer becomes real, but our Scooby-Doo gang isn't sure if its one of them? A great murder-mystery concept there and one that could have properly followed in the self-realization footsteps as "Scream" for modern slashers. Unfortunately, it all gets so watered down by its push for a teen audience and some of its silly acting that its concept loses some of its oomph and it drowns in its own pool of cliche scares and plot progressions.

That's not to say its initially a bad film as it has its place for a "safe" young teen horror flick - but for a slasher its too childish and watered down. The acting is extraordinarily hit or miss with a decent job by Booth as Dodger, but it all sliding down hill from there to some horrible secondary cast members and the scares and plot progressions can be seen from a mile down the road. It desperately tries to throw in red herrings and various detail elements to get you questioning 'who is the wolf' but by the end is pretty damn obvious I thought - so that the twist itself wasn't the right hook it could have been.

So thusly, even with a cool concept, its a rather mundane horror film anyway...but does it work on the check list of being a slasher too? Let's hit the check list:

Awesome killer? I'd give this a check! The idea of a fictionalized killer with a hunter's outfit with a bright orange ski mask isn't necessarily all that cool looking, but director Wadlow handles how he is presented well enough and its costume of "regularly found items in the area" breeds well into the 'whodunnit' story.

Clever and unique kills? No check here. All we get here is by the book deaths in by the book places (attack in the shower room anyone?) and we don't get any deaths until the first act after a woman in shot in the opening. Shot? Pfft. I know this isn't your regular slasher (and the twist verifies that) but they could have come up with some better and more clever death sequences to make it more fun.

Abundance of gore/nudity? Nope. Wouldn't even think about giving this a check. Even on the 'unrated' DVD I watched, there is only a few scenes of blood splatter and no truly grotesque deaths for the film to really hold onto as a slasher. And if you are looking for you usual nudity, none found here as its geared for young adults who have less tolerance for that as they did in the 80s.

Relatable group of heros? I'd give "Cry_Wolf" a check in this column. Despite some horrendous acting performances as one goes into lesser roles, the group of teens we are following is fairly relatable in their wide variety of cliche styles. Punk kid. Cheerleader type. Smart ass. Jock. They are all here and do play off their stereotypes fairly well.

So in the end, "Cry_Wolf" is a half solid slasher, but it falls on insanely weak legs of acting and plot progression to get its concept moving. I admire the attempts as breathing new life into the revival slasher with its concept as a true follow up to the ideas of "Scream", but "Cry_Wolf" just fails to revive the revival. Its more often too watered down and silly to work and that will leave many horror fans hungry for more. Hungry like the wolf. To quote Duran Duran. Perhaps "Cry_Wolf" is a good gateway film to get young people into horror though?