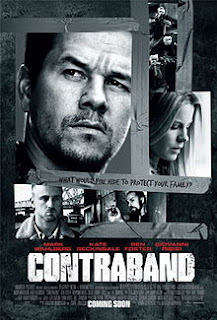 If I was one of those witty and clever writers who I aim to be, I would be able to deliver a funny yet cynical reaction to "Contraband." The problem that I face in trying to make a memorable piece about the film is that...well, the film itself is so damn unmemorable. It's not necessarily a bad film by any means, but it very much nails the mediocre crime thriller beat for beat. This in itself is the biggest let down considering it has a relatively interesting plot and a massive cast of recognizable talent. Yet here I am, struggling to pull any sort of detail about the film to start off my review with. It's best just to start with a synopsis and move on from there.

Chris (Wahlberg) has really refocused his life. He's an ex-smuggler, but his new business and supporting wife Kate (Beckinsale) have kept him strong and life is looking great. That is until her little brother Andy (Jones) gets in some serious trouble when smuggling drugs and owes a local thug (Ribisi) some serious money. Now Chris is going to have to pull off one of the biggest smuggling jobs of his career and the clock is ticking or his family is going to pay the price.

All right. Now that I've had enough of a refresher to sort of pull together the world of "Contraband," let's make this a quick and dirty review. For a film completely focused on showing us the universe of smuggling and how it can be done, the film doesn't do a very good job of allowing us to feel like we are part of this universe. We get plenty of high tension twists and turns to make the film exciting with shootouts, time constraints, and assaults. It strives to make itself complicated with hidden agendas for its characters to activate betrayals and spins on the story. Yet it keeps us at arms length the entire time and never lets us into the film. It's just detached.

This is partially due to the fact that the film is sort of unfocused in what direction it wants to go. It forces itself into its own traps of time constraints and overly complicated plot progressions that craft far too many ridiculous situations to keep the audience interested. Take the armored truck heist for example. The scene is a relatively strong modern action shoot out sequence, but it sort of comes out of left field for the sake of making things more complicated. They try to make it worth it when some details come around in the final act, but its not quite enough to justify it initially or how much time it eats up in the film. This happens a slew of times in "Contraband" and the film must meander through its interesting concept with forced twists that leave the audience disconnected.

This odd way to go about its plot is only made more cliche by un-connectable characters whose shallow depth is made worse by limited screen time. This is caused by one of those weird film habits of having way too many characters. Considering some of the talent involved with "Contraband" - including another subtle supporting performance from the ever awesome Ben Foster - this script doesn't allow the actors to do their job. Never did I really feel their plight from their past sins nor did I really buy into the urgency of their present situations despite the film's desperate attempts at doing such. It wasn't until the third act did I really find myself concerned for anyone's well being and by then it was too late to salvage the entire film.

For a crime thriller with some of the on screen talent it had, "Contraband" plays it too safe and spreads itself way too thin with too many subplots and too many characters. It's unbalanced attempt at juggling it all just falls flat and creates an experience that had potential, but ended up completely unmemorable. Perhaps Wahlberg fans will really dig into the film, but this reviewer is going to quickly forget about the film and move onto bigger and better ones.