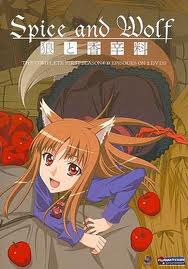 The journey. The trip. The travel. It's all a part of getting somewhere. No matter if its for work, for family, fun or pleasure, we all must travel. Watching "Spice and Wolf" Season 1 was in fact a journey for myself as well. You see as an avid anime viewer I tend to stay in a comfort zone of sorts. I watch mainly what I think interests me. However after seeing countless articles about this series, I decided it was time to take a little trip of my own outside of my comfort zone. So off I go to a far away land and I hope you come along with me.

The story - This adventure centers around a merchant named  Kraft Lawerence who travels from town to town selling his various items to the locals. During one of his town visits he is startled to discover a young woman hidden in his cart of furs. This of course is no ordinary woman. The young lady is actually Holo, a pagan god. She appears in human form with a set of wolf ears and a tail, completely nude, and explains to Kraft that she is the goddess of harvest and has blessed the area with bountiful crop for years. Having heard this tale during his travels Kraft was interested to learn more about her claims. This series is very interesting to me for many different reasons. One being it is set during an era that is similar to medieval Europe. Two, it takes on Pagan gods and beliefs. Third, this anime series some how manages to tell a story about economics and kept me drawn in and completely interested. Last, but not least, there is a romance story to add without really focusing on it. It is the bond between the two that really sets it apart from other romance stories, well at least in my opinion.

The business duo of Kraft and Holo really have a great chemistry about them. Holo helps Kraft during several of his transactions with great monetary success. She is crafty after all. She is there for him when everything crashes as well.

With the Church running a lot of the towns economic systems it is important that no one discovers her true identity as it would lead to her demise. So with the understanding that the church is looking to do away with all Pagan gods, Holo hides her ears and tail in her cloak. However as with any adventurer she has more than one occassion of close calls. 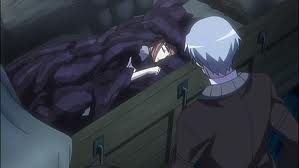 Kraft is the guy every girl's parents would want her to bring home to dinner. He is a man of his word, handsome, and charming. His characteristics really were a large part of the story. They also cause him trouble with the towns folk on occasion. Overall I think this story has it all. Action, adventure, romance, and good writing.

The artwork- The art of this series is so pretty. The pastal coloring just sets the mood so well. 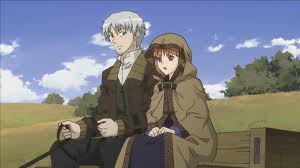 The series looks like the era it is set in. Nothing flashy or hemorrhage inducing. It's so calm and I think that is part of what kept me so into it. The landscapes are beautiful and full of life. I loved the overall look of this series.

The music- The intro song is a solid piece of work. It sounds like a love song and it wasn't overbearing or distracting. The end song was kind of unique, but it was fun and a bit silly. I know most of the words to that song though. The rest of the music was really unnoticable to me. It was subtle and didn't command and attention from my viewing. Which is pretty much how I think it should be. Overall, I give the music a thumbs up!

The voice acting- The actor that voiced Kraft was J. Michael Tatum, and he was excellent. It's hard sometimes with voice acting for me to enjoy a voice over an entire series, but I am totally okay with this one.  Brina Palencia voiced Holo and she too was great for the part. Being that these two characters take up most of the screen time I won't dive into any other voices. So overall I think the talent shows up in this series. Thumbs up again.

Overall- "Spice and Wolf" delivers were others have failed. I started out blind to this series and finished it with hearts in my eyes. The pacing of the story is great, the art is so beautiful, and the characters are brilliant. I honestly don't know why anyone wouldn't fall in love with it. I say to all you folks out there that only watch comedy or fighting animes do yourself a giant favor and watch "Spice and Wolf," you will not be disappointed. My highest recommendation!!!! To end on another positive note, I can not wait to see the second season. Til next time gang, watch more anime!

If "Spice And Wolf" sounds like an anime you just have to see from John's recommendation, then feel free to purchase it from Amazon at the links below. There is also another recommendation from Blood Brothers' resident anime expert!