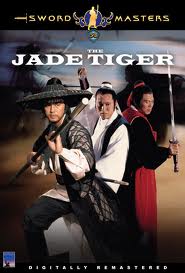 As my Chor Yuen kick continues on courtesy of Well Go USA and their delivery of his films on a regular basis, "Jade Tiger" easily has to be his best I've seen thus far. Where the detective fun of "Clan Of Amazons" and "The Duel Of The Century" was limited by some odd fantasy elements, "Jade Tiger" goes straight for the moral jugular. It breaks down its rather basic and quintessential revenge and clan feud plot into a series of mystery betrayals where the lines of good and evil blur heavily and the damn thing works with a significant amount of effectiveness. It's centered on a strong lead performance from Ti Lung and Chor Yuen's epic visual style only add onto its strong writing for a grand tale 'what the hell is going on' without succumbing to the fantasy world.

Two clans that have been at war for a hundred years find themselves in a wicked game of chess as their struggle against one another grinds down. When the son (Ti Lung) of the Chao clan has his wedding interrupted and a traitor in his family behead his father, he takes his personal vendetta to the next level. He vows to kill his father's killer by infiltrating the venomous Tang clan to find the traitor. Along the way he begins to see the moral gray of his situation as the lines of loyalty blur and the death toll rises.

Essentially, the reason this one comes across as one of Chor Yuen's best films is not the stellar performances or artistic touches he throws into its visual style. It has to do with its tightly wound script and dark streaks of moral ambiguity. Although Chor Yuen has always been known to have fairly epic stories with tons of characters and winding mysteries, the down to Earth focus and drive of "Jade Tiger" really strikes a note with its themes and style. Our hero is lead to believe one thing, but through his own persistence of goal he stumbles upon aspects of his 'enemy' that lead him to believe that the deaths and evil of his own actions lead to only more death and evil. It's this sacrifice for "the common good" issue that still runs universal today and hits a chord with modern audiences. It's a dark film with lots of very connectable characters too that really make it a riveting and heartfelt watch.

This is, naturally, driven by some stunning execution on screen. Ti Lung is always a strong choice for lead and his self inflicted turmoil is apparent and natural while the well placed secondary cast is just as strong as he is and nods go towards some of the other characters that ride on the fence of their moral stances by delivering strong performance after strong performance. Chor Yuen's distinct and epic camera work builds on this (peeking through tree limbs and using some great sets for example) and gives the film his distinctly subtle touch of allowing the audience to feel like a fly on the wall of this tale. To top it all off, the fighting is remarkably stronger than many of his films (sans perhaps the ridiculousness of "The Duel Of The Century") with dazzling sword play and a big finale of traps and raids.

With "Jade Tiger", it feels like the best of all classic Shaw Bros elements are represented in full. Even with its somewhat confusing use of many, many characters, the film flows with an almost vigorous pacing that really pushes the strong performances and great battle sequences up a notch. "Jade Tiger" might not be a flawless film, but its strong story and impressive execution make it one of my favorites and Chor Yuen's best that I've seen.